No drought deaths in Kenya, no food crisis, Ruto insists 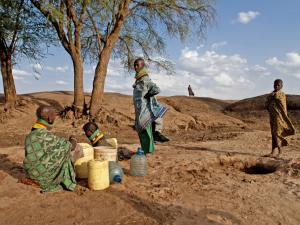 Whereas locals, including government officials, have put the death toll from the current drought at 19, Deputy President William Ruto has remained adamant that no Kenyan has starved to death in any part of the country.

Speaking during the Inter-professional Summit in Mombasa on Wednesday, Dr Ruto dismissed media reports that 11 people have died and accused “detractors” of diverting the government’s attention from the construction of dams that are meant to be long-term solutions to drought.

“There is a lot of fake news about what is happening. We have been told that 11 people have died but that is not true. No one has died as a result of the drought and we are working round the clock to ensure that no one dies of hunger,” said Mr Ruto.

He said chiefs who reported the deaths were summoned for questioning "as they are playing around with a serious matter".

“These are people taking a serious matter involving human life and playing around with it. It is true that, as a nation, we know where we are, as 84 percent of our country is arid and semi-arid. We are generally a water-stressed country,” said Dr Ruto.

The Deputy President further said the country is not facing a food crisis but a challenge in food distribution.

“In our current situation, we do not have a food deficiency. We have sufficient food in the country. We are, therefore, working with other government departments and the counties to ensure that we accelerate the distribution of food that is already available across the country,” said Dr Ruto.

He cited collaboration with parties including the World Food Programme (WFP).

However, several people have reportedly died of hunger-related complications in Tiaty, Baringo County, while thousands of others face starvation as the ongoing drought takes its toll.

Kositei sub-location chief Jack Ronei said deaths linked to hunger have been reported in Kamusuk, Kositei and Seretion, where four people have died. He described the famine situation as dire and called for urgent distribution of relief food to avert more deaths.

In Turkana, which is the most affected according to Devolution Cabinet Secretary Eugene Wamalwa, the situation is just as bad. A locust infestation has worsened the situation, almost depleting the entire vegetation in the county.

In Makueni, thousands of residents are facing starvation following the failure of the short November-December rains, which led to crop failure.

Dr Ruto further said the government had identified both short and long term interventions that will ensure “we get out of a situation which is not an emergency because it is expected”.

On short term interventions, he said rains are expected to fall next Friday according to the Meteorological Department.

“Our long term solution was the construction of dams. As an administration, we decided that this term we will build 57 mega dams meant to store sufficient water and provide permanent solutions to the crisis [facing] livestock and food production,” he said.

However, the government has been on the spot over the phantom Arror and Kimwarer dam projects in Elgeyo-Marakwet County, and an investigation is underway to establish how Sh21 billion was lost.

Dr Ruto said that despite the allegations, the government was committed to ensuring the construction of the dams it promised.

“We have a whole array of dams we want to build to store sufficient water so that we do not end up in crisis but when we are busy fighting for the construction others are diverting our attention,” he said.

The DP revisited the issue of the billions of shillings lost in construction of Arror and Kimwarer saying this was not the case.

“It is impossible. That in one transaction. [How can] we lose Sh21 billion, really? If that is true, what does it say about us? This government is being run by competent professionals. We are not running a casino but a competent government,” said Dr Ruto.

He reiterated that he will follow up on the issue as it was his mandate as the DP.

“Imagine the other day somebody asked me what my interest in the dams was. I am the Deputy President ... the Deputy CEO of a company called Kenya. If I do not know what is going on in this company, then I shouldn't be in this position,” he added.

Meanwhile, the National Drought Management Authority (NDMA) has warned that more than 30,000 people and thousands of livestock in Laikipia County might be affected by the drought if it doesn’t rain in the next week.

This is because the dams, rivers and water pans in the region are drying up fast.

The county's NDMA Coordinator, Henry Mustafa, said pastoralists in drought-prone parts might be forced to move to other parts in search of water and pasture.

“Pastoralists from the neighbouring Isiolo and Samburu counties have also started moving to Laikipia in search of pasture and water, which makes the situation worse as it increases competition for the limited resources,” he said.

As a result the authority said it would supply fuel for community borehole pumps.

“We will provide diesel for 10 boreholes in Mukogodo East and Mukogodo West, which are most affected. The diesel will be used to pump water for domestic use, schools and livestock,” said Mr Mustafa.

He said some of the boreholes that will use the diesel were Tiamamut, Loshaki, Naiperere, Al Jiju, Ol Kinyei, Doldol and Nosirai.

The coordinator noted, however, that, “Residents and the animals are in good health with no diseases reported. The situation is only made worse by lack of water."

A spot check by the Nation revealed that water levels in some of the major rivers in Laikipia had decreased significantly.

The rivers include Ewaso Nyiro, the main one in the region that flows to Samburu and Isiolo counties and feeds Lake Turkana, Ngare Naro, Nanyuki, Ol Arabel, Pesi, Muktane, Gathara, Sundai, Marura, Nyariginu and Sirimon

“We are currently sharing the little water from rivers and dams with both wild and domestic animals, which is risky to both our health and lives,” said Ms Susan Lankas.

The residents called on both Laikipia and the national government to desilt all the dams that have dried up in readiness for the rains.

In an interview with the Nation, Mr Olesosio said although the situation was not dire, the people needed urgent food support as their next best option was migrating.

”There have been three seasons without harvest and even though the mango season saved the day, the grain galleries are running out of stock,” he said.

The commissioner said animals were still in good shape and that pastoralists were yet to begin the scramble for pasture in the Delta. He added that they had portions that could last until the supply of relief food.

”The county government has begun tracking water to affected areas,” he also said.

However, NDMA Coordinator Abdi Musa said there was need for urgent intervention in areas such as Asa and Bangale, where the situation was worsening fast.

He said the levels of malnutrition in children were worsening and that they were dropping out of school.

”The food is very little so the children are forced to sleep hungry,” he said.

In Bura, Bangale and Titila, pastures were depleted as camels from Garissa were devouring the few leafy trees that remained.

Director of meteorology Nyale Guruba said the dry season may not last as long rains are expected in the fourth week of March. Affected dams in the region include Musul, Tiamamut, Kijabe, Mulpusi and Loshaki.