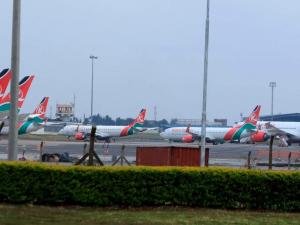 African aviation watchers are keeping a keen eye on Kenya Airways and South African Airways plans to launch a pan-African carrier, fearful that it could signal a return to the bilateralism that has kept Africa’s skies closed for decades.

Compounding the anxiety is the fact that the mooted tie-up has been thin on structural and anticipated operational detail.
Both partners say they are seeking exemptions from domestic and regional competition watchdogs, a move analysts fear could entrench protectionist tendencies, further pushing back current efforts to get the Single African Air Transport Market (SAATM) off the ground.

Nearly five years down the road, SAATM is struggling to get out of the shadow of the Yamoussoukro Declaration, in which member states agreed to the principles of open skies but which has not taken off 34 years later.

Nearly two-thirds of African Union member states have signed up to SAATM since it was launched in January 2018, but not a single flight has taken off under the initiative.
If it is properly structured KQ and SAA’s initiative could attract even more members but, to succeed, it would need SAATM to work.

Prior to and since 1988, when regulatory reform was mooted at the Organisation of African Unity assembly in Yamoussoukro, there have been various attempts to establish and sustain multinational or pan-regional African carriers such as Air Afrique, Alliance Air and FlyAfrica. Most of them failed because of protectionism and nationalism.
Besides open market access, the SAATM also seeks to ensure fair processes and charges by players across the air transport value chain.

Joint structures
For KQ and SAA, so far there is no indication there will be stock-swaps or the creation of a jointly owned holding company that would then go on to buy stakes into other airlines.

For the airlines to make it work, the first thing that has to be clarified is who owns what, who gets to make the decisions, where are the taxes paid and who controls the money.

Analysts believe that approach would be much simpler and would enable them bypass many competition issues. That is pretty much the blueprint Ethiopian is following by buying stakes into airlines in different parts of the continent, which will operate as regional hubs. Crucially, by taking only minority stakes, the target airlines remain designees of their respective countries, which makes SAATM less of an obstacle to them.

Another example is International Airlines Group (IAG), an international holding company that owns stakes in several airlines, including British Airways, Iberia, Aer Lingus, Vueling and Level. It is registered in Spain, but its head office in London, where its operations are co-ordinated. Through careful management of capacity, resource sharing and schedule harmonisation, it has helped member airlines return to profitability in Europe’s liberalised air transport market.

In contrast, previous attempts at pan-African airlines such as Alliance Air collapsed amid protectionism that denied them fifth freedom rights apart from the single route to Heathrow on which the carrier was designated by South Africa, Tanzania and Uganda.

As long as market access is regulated by bilateral air service agreements, there would also be a need to determine how the new airline would be designated and on which bilaterals’ could it be designated.
These considerations as well as foreign ownership restrictions and anti-trust laws are the reason why there are global airline alliances and not multinational airlines.

When it was first hinted at during Africa Aviation Day in Mauritius in September 2018, the plan was to have an African Airline Alliance. Initial members were Air Mauritius, Kenya Airways, RwandAir and South African Airways. The initiative seemed to fizzle out as RwandAir pursued a tie-up with Qatar Airways while KQ and SAA sank into a financial crisis and Air Mauritius went into administration.

Reinvigorated during a state visit by former president Uhuru Kenyatta to Pretoria last November, the proposed partnership was expected to help both airlines consolidate financialy by leveraging their strategic strengths through deeper coordination of passenger and cargo operations and pricing.
https://www.theeastafrican.co.ke/tea/business/no-easy-take-off-for-kq-sa...