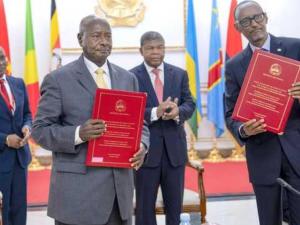 Rwanda and Uganda remain at loggerheads after almost three years of strained relations despite diplomatic efforts to resolve the outstanding issues.

Addressing the ruling party's Extended National Executive Committee meeting on May 1, President Paul Kagame described relations with Tanzania and DR Congo as cordial while relations with Burundi are on the mend.

“We want to normalise relations with Burundians and they have proved they are keen on having good relations with us. We are in the process of finding solutions to the existing problems,” he said, adding that all Rwanda wants is “to live in peace” with neighbours.

President Kagame, however, expressed frustration at the state of impasse in the relations with Uganda, despite multiple diplomatic efforts.

“The neighbour in the north (Uganda) has a problem with us. I lived there, I worked with them. If you asked me to tell you its (crisis) roots I don't understand. For me, I will roof my house so that I do not get rained on. I will put strong doors so that you cannot intrude and take my property. If you force your way in, I will force you out…” President Kagame said, in a veiled message to Kampala.

Both countries have traded accusations, with Kigali accusing Kampala of supporting armed groups against it, harbouring hostile groups, kidnapping as well as torturing Rwandans in Uganda. It resulted in the closure of the border. Uganda too has accused Rwanda of trying to impose a trade embargo and espionage.

In October 2020, Vincent Biruta, Rwanda’s Foreign Affairs Minister, told the Paris-based Africa Report that though Uganda has started releasing Rwandans who were illegally detained, “the politico-military groups operating out of Uganda and behind the October 2019 attack are still active.”

“They continue to receive the backing of certain Ugandan officials. As a result, in recent months they have carried out political actions in refugee camps with the support of various security agencies. We’re still waiting on concrete action to be taken to end these activities.” Mr Biruta said, in response to a question as to whether relations with Uganda were back to normal.

On May 5, Uganda deported 17 Rwandans whom Kigali maintains were illegally detained.

The strained relations between the two countries have undermined free movement of people and led to restrictions on movement of goods.

“My call is that stalled talks between Rwanda and Uganda resume as soon as possible both on bilateral and multilateral levels and the media stop meddling. Uganda is a country of interest because most of us were born or grew up there,” said Frank Habineza, a Rwandan member of parliament and Green Party president.