October 1: How is Patriotism Day relevant to Rwandan youth? 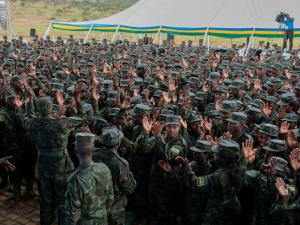 October 1, 1990 will always be an important day in the history of Rwanda.

For the nation, it is a historic point in time, the day when the Rwanda Patriotic Army (RPA) launched the liberation struggle in northern Rwanda.

According to Deputy Ombudsman in charge of preventing and fighting corruption, Clément Musangabatware, patriotism means the sense of strong and continuous attachment to one’s country, a strong commitment to serving your country and being ready to die for a justified cause.

Protais Musoni, the Chair of the Pan-African Movement (PAM-Rwanda), said: “It [patriotism] is relevant to today’s youth in that they should recognise that what they are is a result of a great social effort. The youth need to return the favour, and create a good future for themselves and others.”

Patriotism has much to do with “loyalty to your country,” Musangabatware added, noting that nowadays, Rwandan youth are, among others, taught national values in the national civic education training programme, Itorero.

Available literature indicates that Itorero was started by King Gihanga Ngomijana (1091-1124), known as the first King of Rwanda, with the aim of imparting values on Rwandans of different categories.

It was a platform that was used to promote peace and unity among Rwandans. For example, boys above 14 years of age were taught how to hunt, protect their homes when they grew up, as well as to love their country.

Ange Nicole Teta Mugabo, 19, a senior six graduate from Lycée de Kigali (LDK), attended cohort 12 of Itorero in August and she associates Itorero with “a place that sharpens one’s mind through the teachings of patriotism.”

Those who go through the programme understand what Rwanda has passed through in order to have the marvellous and transformed country we have now, the teenager observed.

She said: “Sacrifice, love, and the need to have and live in your own country; that’s what I call acts of patriotism. But now we don’t have wars to fight, the battle we have now is the one of development; working harder and harder as we strive to excel.”

“Attending Itorero made me feel more patriotic. I’m committed to working hard to develop my country and, even if possible, risk my own life for it.”

Nonetheless, Musangabatware and Teta acknowledge that Rwandans cannot afford to rest on their laurels as there are emerging threats to contend with.

The former listed alcohol and drug abuse, dropping out of school, under age pregnancies, and conflicts in families as serious risks that the youth of today are faced with.

But he is not entirely hopeless as he has seen some good models including youth involved in volunteerism in community work, helping vulnerable groups especially by constructing of houses for the homeless, reporting corruption, setting up anti-corruption, unity and reconciliation clubs.

As for Teta, among others, efforts geared at countering genocide ideology will be crucial.

The youngster knows that her nation still struggles with the ills of the 1994 Genocide against the Tutsi which left more than one million people dead and a devastated society and economy.

She said: “Some young people whose parents were involved in the Genocide grew up with genocide ideology and that spoils their mind.

“In the journey of national development, we have to move together; which requires people with clean and clear mindsets. The elders should cater for this. Most often, such young people are abroad and, approaching them through different congregations either at embassies or diaspora meetings would help to halt this threat.”

Once the threat of genocide ideology is checked, the teenager noted, the nation and, especially the youth, will advance as one “with the same spirit of unity and, patriotism will be deepened.”

Besides drug abuse and other ills afflicting society today, Teta is also bothered by the case of brain drain or the emigration of highly trained or qualified people from Rwanda.

“Once you abuse drugs your mind is blown away I don’t know how such a youth will have the mind to think about the country or themselves. With regards to brain drain, if the youth get a chance to go abroad for studies and don’t really have the love and zeal for their nation, they will not come back to work with others to develop the country.”

The elders, she said, should “help us” to sort out this.

“Of course we’re also citizens and we’ll contribute to solving these issues.”

Musoni further pointed to an inclination to soft life, globalization, sectarian ideologies, and social cultural beliefs with external dependence mindsets as other risks to contend with.

The key lessons from October 1, he said, are: commitment, ownership and sacrifice for solutions to the social ills; the youth taking the lead; the spirit of self-reliance; resilience in the face of “undoubtedly greater forces against you,” and that dignity is fought for.