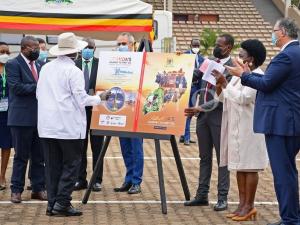 President Museveni asserted on Friday that development of the East African Crude Oil Pipeline (EACOP) will go on as planned to allow commercial oil production to start within the projected time frame of 2025.

After telling his ruling NRM party caucus as much at Kololo Independence Grounds on Friday, the President took to Twitter to tell the country that the under fire French oil giant Total Energies SE—the lead on the EACOP—are contractually bound on the $3.8b (Shs14 trillion) project.

Tanzania, Uganda hit back at EU on Oil pipeline plan

“I saw in the [news] papers that the EU parliament passed a resolution directing Total not to proceed with the East African Crude Oil Pipeline. Please, don’t waste your time thinking about that,” Mr Museveni reportedly told the closed door meeting.
“We have a contract with Total written very well. The oil will come out in 2025, the first batch. The oil project will go on and no one can stop it.”
On Twitter, Mr Museveni said the government would look around for other investors to work with if Total succumbed to pressure.

The President’s comments followed a resolution passed by the EU parliament, seeking to compel Total Energies SE and Uganda to defer construction of the EACOP by one year to allow for a fresh feasibility study to explore alternative routing of the infrastructure.

The resolution sparked outrage in Uganda, with pundits calling it another hallmark of Western sanctimoniousness and neo-colonialism.
The EU parliament’s resolutions are not binding but rather advisory to the EU Commission, the executive branch of the 27-member trading bloc responsible for implementing decisions and managing the day-to-day business of the EU.

Thursday’s resolution is the second resolution against Uganda to be passed by the EU lawmakers in less than two years. In February last year, the EU parliament unanimously voted to compel the commission to invoke the Magnitsky Act to sanction individuals and organisations after dust from the 2021 General Election settled.

Shifting goalposts
The anti-EACOP resolution was initially dressed in environmental concerns and climate activism. By the time it was passed on Thursday, human rights was the centre point of the debate.

One Western diplomat told Sunday Monitor “it is another grudge match” against the Kampala regime.
“Human rights is the key theme here. There are some voices back home that feel that our governments are letting him (President Museveni) get away with many things. This displeasure can be expressed in many ways,” the diplomat intimated.

For instance, since the protests last November in which more than 50 unarmed citizens died at the hands of state security operatives, the government has neither assumed a level of culpability nor arrested/prosecuted the perpetrators.
The EU is a huge funder of Uganda’s development budget, particularly infrastructure. Kampala has largely avoided a fight with Brussels, which would be akin to railing against a loaded purse.

The anti-EACOP resolution alleges human rights abuses, including wrongful imprisonment of and harassment of human rights defenders and the arbitrary suspension of NGOs.
The EU MPs backing the resolution have further stoked the flames, propagating fears—real and perceived—about development of the 1,445km duct. The heated pipeline will transport Uganda’s waxy crude oil from the oil fields in mid-western Uganda to Tanzania’s Indian Ocean Tanga port en route to the international market.

The southern route to Tanzania was considered as the “least cost option” for the EACOP.
The EACOP company managing director, Mr Martin Tiffen, told Sunday Monitor that the project is significant to commercialisation of Uganda’s oil.

“EACOP [company] shall do its utmost to ensure the project is carried out in an exemplary manner in terms of transparency, shared prosperity, social and economic progress, and sustainable development, including the environment and respect to human rights,” Mr Tiffen said.

On the side of EU grudge with the Kampala regime is Brussel’s feud with Total Energies SE, which Brussels accuses of cozying with Moscow that attacked Ukraine, unprovoked, eight months ago.

While the Total Energies SE condemned Russia’s invasion of Ukraine, it emerged last month the company, with its local partner Novatek, operated a field used to generate jet fuel for Russian combat planes engaged in the war in Ukraine. The revelation last month sparked outrage in Brussels, the seat of the EU.

Total Energies SE denied the accusation. The company is the parent company of Total Energies EP, which is developing oil fields in Nwoya and Buliisa districts, and Total Holdings International B.V, which holds majority shareholding of 62 percent in the EACOP holding company.

Other shareholders are Uganda National Oil Company (UNOC) and Tanzania Petroleum Development Corporation (TPDC), each with a 15 percent stake as well as China’s oil company—Cnooc, with eight percent.
https://www.thecitizen.co.tz/tanzania/news/east-africa-news/oil-pipeline...