One step forward, two back — Biruta on relations with Uganda 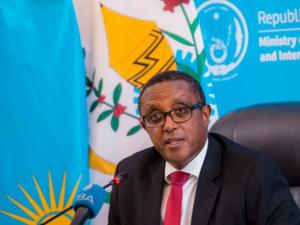 Efforts to restore and improve ties with Uganda can be termed as one step forward two back, Minister of Foreign Affairs Dr. Vincent Biruta has said.

Biruta was speaking at a press conference on Wednesday morning on local, regional, and global issues.

While there has been some progress in the release of Rwandans who were illegally arrested, Rwanda continues to witness continued harassment of Rwandans in Uganda, continued operations of anti-Rwandan government elements as well as territorial violations, Biruta said.

The state of recent affairs saw him define the progress as one step forward two back but reiterated Rwanda’s readiness to improve ties.

On a recent letter that was circulating in the media allegedly by Uganda’s President urging border residents to beware of the Rwanda government’s shooting smugglers and those illegally crossing the border, Biruta said that they have seen the letter in the media.

He however noted that they are yet to ascertain the authenticity of the letter but have also not seen a denial of its authenticity.

The raised issues do not exist, the Minister said adding that in actual sense, there have been cases of UPDF soldiers crossing into Rwanda, kidnapping and attempting to kidnap Rwandans and asking for ransom to release them.

“We have communicated this to the Ugandan Government through diplomatic channels,” Biruta explained.

“The issue of smugglers who infiltrate Rwanda illegally and violently resist arrest, leading to them being shot, is true. We have talked about this before but the letter does not address recent incidents involving UPDF soldiers who cross to Rwanda to abduct people. We have instead seen cases where UPDF soldiers cross to Rwanda to abduct people and they take them across where they ask for ransom to release them. We have communicated this to the Ugandan Government through diplomatic channels,” he said.

At the meeting, Rwanda expressed concern that there were still activities of terrorist groups operating in Uganda whose primary mission is to destabilize the country.