Optimism as government meets with mobile operators over levies 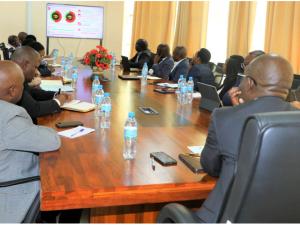 Dar es Salaam. The Ministry of Finance and Planning has reiterated that it was working on finding a better way of ensuring every Tanzanian contributed to the country’s development, as public outcry over electronic transfer levies continues.

This, the ministry said, was implementation of directives given by President Samia Suluhu Hassan who noted that the imposed levies did not end up being a burden to Tanzanians.
It was on this basis that the Ministry of Finance and Planning met with members of the Tanzania Mobile Network Operators Association (Tamnoa) in Dodoma yesterday.
The two sides deliberated on challenges and benefits encountered by mobile service providers since the passing and effecting of the new electronic transaction levies.

Ministry’s statement availed to The Citizen quoted deputy permanent secretary Lawrence Mafuru as saying the meeting was also meant to gather expert views of the service providers about the impact of the implementation of the law on electronic levies as well as getting consensus for a better solution.

Mr Mafuru said the main goal remained to widen the tax base in the country so as to speed up development activities but at the same time being cautious of the impact on the people and the economy at large.
“We have agreed to review the charges and make sure they remain friendly to Tanzanians,’’ said Mr Mafuru.

According to him, the telecom service providers serve up to 40 million customers who make electronic transactions via their mobile phones. The meeting brought together: Airtel, TTCL, Vodacom, Tigo and Halotel.

Halotel Tanzania’s Halopesa assistant director Magesa Wandwi commended the government for reducing charges in the different periods, since its inception where there was a 30 percent reduction in the year 2021/2022 and in the financial year 2022/23 the government has reduced the charges by 43 percent.

Mr Wandwi added that the reduction has restored the speed of mobile transactions which had decreased considerably.
This comes just days since the ruling CCM’s Central Committee directed the government to review the law on electronic transaction levies so as to address people’s concerns.

Meanwhile, opposition Chadema yesterday noted with concern that they expected the Ministry of Finance and Planning to suspend the implementation of the regulations on electronic levies without having to wait for consultations because currently the people continued to suffer.

Chadema said in a statement to the press that once the suspension of the regulations is effected then the minister responsible with Finance should table a Bill in the ongoing parliamentary session for for possible amendment of the financial law that expanded the scope of charges in electronic transactions.
“Since he has failed to do so until now, even after the opinion of the people, parties and other stakeholders, he should resign or his appointment should be revoked by the President,” the statement to the media said in part.

“A tax is a tax, and any law that deals with tax and financial matters must get the President’s approval before its Bill is submitted to Parliament and passed into law,” the party said quoting Article 99(1) of the Constitution.

The Article reads: “Once approved by the Parliament, the bill does not begin to be implemented as a law until it first receives the consent of the President” (Article 97(1)).
“…The Minister of Finance is taking responsibility for failing to provide appropriate policy direction in the initial stages, but more so now for failing to implement the views of the people in a timely manner,” Chadema stated.
https://www.thecitizen.co.tz/tanzania/news/business/-optimism-as-governm...