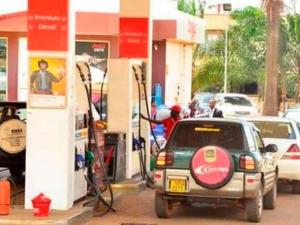 The fuel crisis has continued to bite for the second week running, with no signs ending.

Some fuel stations have also run out of fuel as a result of the shortage caused by delay of trucks at the border with Kenya.

Government at the weekend dropped the medical tests for Covid-19 truck drivers at the border and are now using temperature guns to find suspected positive cases as they struggle to clear supplies, especially fuel, to solve shortages in the country.

The rise in prices triggered high cost of living with commodity costs and transport fares going up.

The high cost of fuel has also affected the prices of other commodities in the district.

Mr Bernard Anyeko Matsanga, the spokesman of Lira Urban Transporters Association (Luta), said the impact of the high costs of fuel has led to the increase of prices of other commodities in the district.

“As I talk now most stations in Lira City have run out of fuel and the few which still have are increasing the price the way they want because of the high demand,” Mr Anyeko said.

He added: “If nothing is done to increase the fuel supplies, we as public transporters shall be forced to close our business by parking our vehicles.”

“With such a crisis, the government is silent yet people are feeling the pinch as a result of the fuel scarcity,” Mr Moses Okello, a driver in Soroti City, said.

He appealed to the government to establish more fuel reservoirs for emergencies.

Various petrol stations countrywide have also disregarded a directive by the government warning fuel dealers against taking advantage of the temporary fuel shortage to fleece motorists.

The fuel crisis started in November last year but the government said it cannot regulate the fuel pump price because the market was liberalised.

In Apac District, all the five fuel stations in Apac Town ran out of fuel.

Many fuel stations in Kabale Town have also stopped selling fuel to customers with jerry cans and plastic bottles following the crisis.

In Mbarara, most stations did not have fuel at all and those that had were selling it expensively.

The manager of Petrol Uganda in Mbarara, Ms Rehema Namusoke, said: “We do not have fuel because consumption is high. We used to offload about 20,000 litres twice in a week but these litres are no longer enough because now on a daily we use 10,000 litres.”

While inspecting the Namekara Mining Company Limited in Manafwa District at the weekend, Ms Nankabirwa said the crisis would soon be sorted.

“This particular hiking now has no bearing on the international price. This is management and administration issues at the border where we had URA (Uganda Revenue Authority) having a challenge of a scanner so they had to bring a mobile scanner from Elegu to Busia to reduce congestion that was there,” she said.

She added: “I am calling upon the dealers not to use this chance to cheat Ugandans. I know we are following a liberalised economy where market demands determine prices but it is not good to cheat. You can’t raise from Ush5,000 ($1.41) to Ush12,000 ($3.38),” she said.

The minister further warned that if the dealers do not stop increasing fuel prices, it would have a huge impact on all goods.