Over 600,000 people affected by floods and conflict in South Sudan 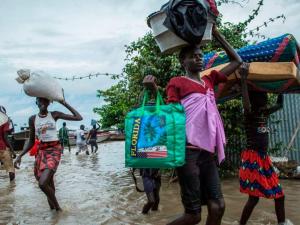 More than 623,000 people have been affected as a result of persistent flash floods and conflicts in South Sudan, according to the United Nations humanitarian affairs agency.

In a September humanitarian snapshot seen by The EastAfrican on Friday, the United Nations Office for Coordination of Humanitarian Affairs (UNOCHA) said those affected are from 27 counties across eight states.

“Jonglei and Unity states were the hardest hit—representing some 58 per cent of the affected people—followed by Upper Nile, Western and Northern Bahr-el-Ghazal. Over two-thirds of the flood-affected counties faced high levels of food insecurity.

“Schools, homes, health facilities and water sources were inundated, impacting people’s access to basic services. Physical access remained a major challenge for humanitarian organisations to assess and respond to the needs of flood-affected people,” reads the snapshot the covers between May and September this year.

UNOCHA estimates that sub-national violence in Tambura County of Western Equatoria has affected about 80,000 people.

“The fighting has continued since June and access to conflict-affected people has been challenging. Fighting between armed groups in Yei County, Central Equatoria, displaced some 650 people to Yei town.

“Others fled to the bush, yet more are reported to have fled to the Democratic Republic of the Congo. Sub-national violence was reported in Pibor, Akobo and Nyirol counties of Jonglei and Tonj North in Warrap,” OCHA added.

On October 1, Warrap State senior official told The EastAfrican that at least 20 people in the State died as a result of continuous devastating floods.

The official added that at least 17,500 people were displaced according to the assessment carried out by the State Relief and Rehabilitation Commission.

According to the Intergovernmental Authority on Development (Igad) Climate Prediction, heavy rainfall was expected to continue in northern and central parts of South Sudan until mid of September.

Last month, South Sudan’s Minister for Humanitarian Affairs and Disaster Management Peter Mayen appealed to the cabinet to release $10 million dollars for flood response. But there has been no official response to his plea.

Despite a period of relative stability, UNOCHA says more than 7 million people still need humanitarian assistance across South Sudan due to the cumulative effects of years of conflict, chronic vulnerabilities and weak essential services.