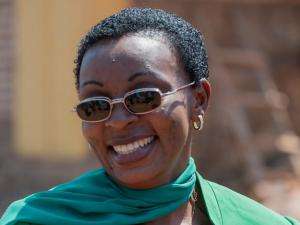 Ingabire Victoire Umuhoza, given presidential mercy two years ago, is planning to have her party on the ballot in the 2024 polls which will end the current 7-year presidential terms regime.

She says the party is preparing to submit new documentation for registration, despite failing to do so in the last 9 years.

Ingabire leads the United Democratic Forces or FDU Inkingi, which is not a registered political party in Rwanda, and therefore not among the 11 parties in the country. All registered parties are also members of the consultative forum for political parties.

Founded in Europe, some of FDU’s activities moved to Rwanda in 2010 when she return from exile. Other key members remain in Europe.

By the time of the August 2010 presidential polls, Ingabire was already battling the state in court against various serious charges including terrorism. During the last poll of August 2017, Ingabire was serving a 15year jail sentence.

Little did Ingabire know however that a few weeks after President Paul Kagame had secured a 2nd landslide victory, she would be pardoned on September 14, the same year.

The hard-talking politician is back in the nation’s political limelight, giving endless interviews especially to foreign media, as she did before her prosecution and eventual conviction up to the Supreme Court.

Ingabire, as par electoral law no. 29 of 29/07/2019, stipulated in Article 21, is not eligible for candidacy to any electable office in Rwanda as a result of her conviction. Ingabire cannot contest for an electoral post even at a village level. In addition, she cannot lead or register a political party in Rwanda. These can only be possible if the dynamics sudden change and the laws are amended.

The Presidential Order pardoning Ingabire put 3 conditions for her release including: seeking permission of the Minister of Justice should she want to travel abroad, and report to prosecutor’s office in her area of residence on first Monday of every month.

Ingabire is reported to have told American government broadcaster VOA in interview aired Tuesday that her party will indeed field a candidate for the presidential elections in 5 years time.

She did not name the candidate or specify if she will herself be on the ballot.

Up until the 2015 constitutional amendments, a presidential term was 7 years. After the current term, the president will rule for five years, renewable only once.

Meanwhile, following the rebel attack in Musanze district on the night of October 4, which killed 14 people, Ingabire has been summoned to the Rwanda Investigations Bureau (RIB) in connection with the attack.