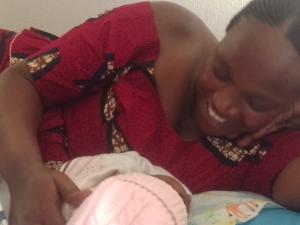 Four months ago, Rehema Kampire from Rubavu district experienced birth pangs and was rushed to a nearby clinic where the medics couldn’t handle the case thus transferred to Gisenyi hospital.

At the hospital, Kampire gave birth to a premature baby girl six months into her pregnancy and had a baby girl who weighed 1.3kgs instead of the normal three kilograms (If was born in nine months).

The baby was immediately put under antenatal care spending one and a half months in the Neonatal Intensive Care Unit (NICU).
“My hope for her survival was low,” Kampire said.

Kampire’s case was complicated but with skilled nurses at the hospital, they were able to trace the causes of her complications including the fact that she had had previous care of miscarriage.

Nurses say the miscarriage is one among many reasons, that can have pregnant women have a premature birth.
Claudine Uwingabire, one of the nurses who handled her case, says they were able to discover that she had also not taken the eight compulsory pregnancy tests that expectant mothers are required to do to have safe birth.

Knowing this information, which was key to saving the premature baby, Uwase and her colleague, Ananie Maniraguha, a Midwife say that the performance is owed to skills, equipment, and improved organizational structure which they benefited fromIntegrated Rwandan Perinatal Improvement Programme (RPIP).
“We lacked skills to use equipment but also used to work under chaotic conditions where all maternity services were in one place, which can risk lives of children in neonatal care, but now we have improved skills and able to handle complicated cases,” Ananie Maniraguha said.

Kampire’s baby girl survived death, and she is now weighing three kilograms after four months which parents call a miracle.
“I named her Melisa Isheja but the nurses also named her Igitangaza (a miracle) because of the way she evolved,” Kampire said.

This is one of the many stories of children and mothers whose lives have been saved under this program which started in 2017- aimed at strengthening the quality of perinatal and neonatal care in Rwandan hospitals, and is ongoing.

So far, the program is implemented and operates in 105 health facilities (19 hospitals and 86 health centres), and is supported by the government of Rwanda and international private companies like Takeda- a global pharmaceutical company.

The Director of Gisenyi Hospital, Dr. Oreste Tuganeyezu, says that their biggest challenges were issues of having many premature babies, expectant mothers getting infections and lack of staff skills and equipment which needed to be addressed, and thanks to the program which has improved the maternity and neonatal section to follow up on the cases as they come in.
“We have not reached 100% but we are heading to the goal of ensuring that no woman and child should die at birth, Tuganeyezu said, that they have 4 premature cases out of 300- 500 children born per year, and the goal is to make it zero.

Dr. Emmanuel Manzi, a UNICEF Health Specialist says that the program was initiated to bridge existing gaps, which were lacking in reducing maternal and child fatalities despite the impact of improved primary healthcare.
Neonatal mortality dropped by 30% from 2017-2022, hypothermic babies in maternity went from 45% to 13%, while hypothermia on neonatal admission fell from 58% to 38% (from 2019-2022).