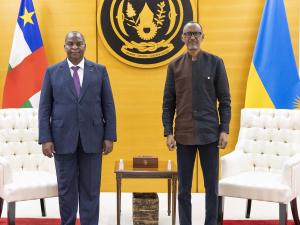 President Paul Kagame on Wednesday met with Central African Republic (CAR)) counterpart Faustin Archange Touadéra who is in Rwanda on a working visit.

The Central African Republic leader last visited Rwanda more than a year ago, in August 2021, on a three-day state visit. President Touadéra and President Kagame held talks at Urugwiro Village, mainly focusing on security and the political situation in his country, among other things.

“President Kagame met with President Touadéra of the Central African Republic who is in Rwanda for a working visit. The heads of state discussed the political situation in CAR & ongoing bilateral cooperation in various areas including security, governance and economic development.” the Office of The President said.

The Heads of State committed to intensify bilateral ties, and agreed to promote trade, financial, cultural and technical cooperation. Rwanda and CAR have signed different agreements in the areas of economic planning, mining, security sector reforms and cooperation in transport, among other sectors.

Earlier this month, President Touadéra and his wife invited and shared dinner with 200 senior officers, officers and other ranks, of the Rwanda Bilateral Force led by Col. Egide Ndayizeye, at his home in Damara district, Central African Republic.
During the reception, President Touadéra thanked President Kagame for the support and collaboration with his government in maintaining security in CAR.

On the same day, President Kagame received a delegation from Guinea, led by Ousmane Gaoual Diallo, the country’s Minister of ICT and Special Envoy who brought him a message from Guinea’s Transitional President Colonel Mamadi Doumbouya.

President Kagame has in the past hinted on Rwanda engaging with different African countries on a bilateral level, in regard to safety and security, as it has done with CAR.
https://www.ktpress.rw/2022/10/photos-car-president-touadera-in-rwanda-o...