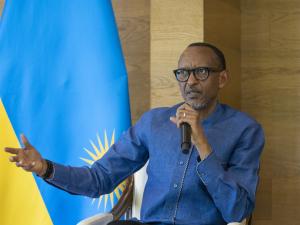 President Paul Kagame says democracy should be about governance and people making their own choices instead of others imposing their preferences on them, for it to have meaning.

The Head of State made the observation on Wednesday, August 3, at Urugwiro Village, during an interactive session with a delegation of 26 global Chief Executive Officers (CEOs) who are part of the leadership of the Young Presidents’ Organization (YPO), currently in Rwanda participating in a “Once in a lifetime bucket list” trip.
The objective of the trip is to give a select group of CEO members within the YPO an experiential trip across 9 unique countries to discover the cultural and touristic destinations while connecting with local business leaders.

During the session, President Kagame discussed a wide range of issues with the group, among other things, answering critics of Rwanda’s democracy model who disregard many factors, including the choices people have to make, to impose a one-size-fits-all approach.

“Democracy for example. I prefer to see it as governance. It is really governance. Democracy means governance and it means choice, the choice of people. People choose what they want, what they want to do themselves. If the people of Rwanda, their choices and ways of life are not to be respected, but rather must conform to other people’s choice, then we are not talking about democracy really, because if it is democracy, then you allow people to make their choice.

“For us we are not shy about playing our part, mainly bearing in mind, where we come from, who we are, what we want to be, and we want to stick to that,” President Kagame said.
The YPO delegation visited Italy before arriving in Rwanda and will continue on to Kenya, Seychelles, Nepal, Bhutan, Turkey, Romania and Switzerland. While in the country the delegation also visited the Volcanoes National Park where they saw mountain gorillas in their natural habitat.

The Young Presidents’ Organization is the largest global network of business leaders with more than 30,000 members in more than 130 countries.
https://www.ktpress.rw/2022/08/photos-democracy-is-about-respecting-peop...