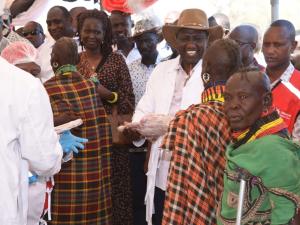 In a post on his socials, Lumumba, also a former anti-corruption boss, says showing people receiving food donations is not good for their dignity.
“I am urging the Kenyan Government to stop distributing food under the glare of publicity because it dehumanizes and humiliates the recipients and glorifies the “giver”. We have dignified structures which should be used,” he posted on Twitter.

The post comes a few days after the eloquent lawyer took a swipe at President William Ruto’s government after Deputy President Rigathi Gachagua requested Kenyans to contribute towards starving Kenyans.
Lumumba attached the amount of money the cabinet secretaries would donate if one per cent of their net worth was subtracted and said, “I urge all Kenyans of goodwill to support this noble and humble appeal as we join sacrificially to the extent of our abilities.”

Cabinet Secretaries recently revealed at their vetting they are each worth hundreds of millions of shillings.
Gachagua had urged Kenyans to contribute towards feeding starving Kenyans in drought-stricken areas.
The Kenya Red Cross late last month distributed relief food in the North Eastern region with each of the 1080 families getting 25kgs of maize flour, 5kgs of beans, 1 litre of cooking oil and a kg of salt.

While distributing relief food to 12 counties, President William Ruto said the government had allocated Sh5.2 billion to deal with drought.
In regions such as Turkana, more than 500,000 people have been affected while a total of 4.2 million people in 23 counties from Arid and Semi-arid Lands (ASAL) are facing hunger.

Additionally, the government through the Agriculture ministry said that they would purchase emaciated livestock affected by drought.
https://nairobinews.nation.africa/plo-lumumba-urges-government-to-stop-s...