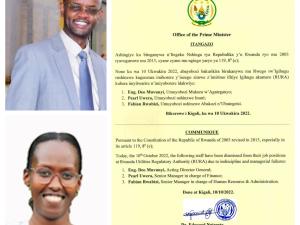 The Prime Minister, Dr. Edouard Ngirente, on Monday dismissed senior officials at Rwanda Utilities Regulatory Authority (RURA), over what was described as ‘indiscipline and managerial failures’.

Details of what they did were not revealed but according to sources, the dismissal came after several weeks of scrutiny at the regulatory body, which discovered serious cases of mismanagement at the government body charged with regulating key services of public interest.

Eng. Deo Muvunyi, who was serving as the Senior Manager in charge of Transport Planning and Industry Development at RURA, was appointed the caretaker on February 16, 2022.

He had been serving as the Senior Manager in charge of Transport Planning and Industry Development since 2004. Among other duties and responsibilities, he was charged with preparing recommendations for transport strategic plan, developing the transport sector regulatory framework and following up on the execution of transport sector action plan and budget.