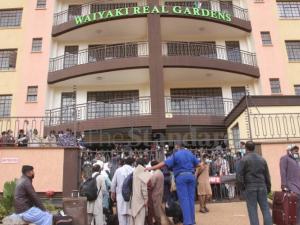 The government on Thursday launched a crackdown on illegal Pakistanis nationals. The crackdown saw over 1,500 male individuals believed to be on transit to Saudi Arabia and Doha arrested at Waiyaki Real Gardens along Waiyaki Way.

Officials from the Immigration Department vetted their documents before they were escorted by police to board buses to ferry them into various hotels where they will quarantine for 14 days before travelling to their final destinations.

For weeks now, Kenyans on various platforms have been speculating about an influx of Pakistani nationals in Nairobi and its environs.

More concerns were raised over the weekend after a group of the foreigners trooped into an apartment at Great Wall Apartments within Athi-River, after alighting from a city bus carrying huge briefcases.

The men who walk in groups have been conspicuous with flowing robes are scattered in Ongata Rongai, Buru-Buru, Syokimau and some parts of Kasarani.

At the city centre, they have been spotted along River Road, Luthuli and some areas with cheap accommodations in downtown areas where they have booked rooms and spend evenings strolling around the city.

Government spokesperson Cyrus Oguna earlier on said the numerous Asians who had been spotted in the video in Athi River were tourists.

Through a Tuesday, September 28 statement, Oguna said all the Asians who have been arriving in the country not only possess legitimate passports but also followed due process before they were allowed into the country.

According to Oguna, foreign nationals have been visiting the country for holidays.

“They are tourists in the country legally and some usually prefer staying and travelling as families,” Oguna said.

But a day later, Interior PS Karanja Kibicho said the government has ordered an immediate crackdown on foreigners who are in the country illegally.

Interior PS has said the exercise will be undertaken by the Immigration department and the police.

"The majority of these travellers have originated from Pakistan and have valid transit visas to Saudi Arabia that are issued on arrival," Kibicho said.

Kibicho admitted that in the last four months, Kenya has witnessed a surge in the number of foreign travellers transiting through its international airports.

The PS said the government is, however, alarmed by the threat of the spread of the Covid-19 pandemic posed by the influx of foreign travellers transiting through the country.

"Going forward, the government will restrict the number of foreigners transiting through the country to levels that do not pose a risk to Kenya's national interests."

The Ministry of Foreign Affairs had written a protest letter to Pakistan High Commission in Nairobi raising the same concerns.

“The Ministry of Foreign Affairs of the Republic of Kenya presents its compliments to the High Commission of Pakistan in Nairobi and has the honour to note that the government of Kenya's attention has been drawn to a recent spike in the number of persons travelling from Pakistan enroute to Saudi Arabia and other destinations, transiting through Kenya,” read part of the letter.

“The Government of Kenya regrets that some of these passengers are taking advantage of Kenya's status with these countries with regard to the COVID-19 quarantine regulations. This threatens to undermine Kenya's agreements with these countries which are put in place to ensure continuation of business and travel operations between our countries,” the letter read.

The letter said, as a result, Kenya is seeking Pakistan’s cooperation and solidarity in ensuring adherence to the arrangements.

The ministry said this is a fundamental imperative as the world seeks to contain the pandemic and ensure full economic recovery.
In this regard, the government of Kenya wishes to inform that Kenya is hereby stopping the visa-free transit arrangement with Pakistan. Till further notice, Kenya will require visas for passengers from Pakistan to Kenya. Kenya will therefore not accept passengers from Pakistan without entry visas to the country,” the letter read.

The ministry said those who fail to abide by these provisions will be turned away and required to leave the country immediately upon arrival.