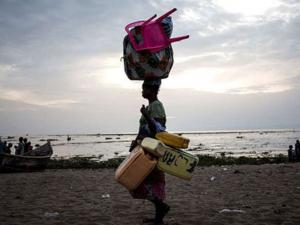 As the wind blows over the surface of Lake Albert, the waves gently lap against the shore, creating an ostensibly tranquil atmosphere. But for many residents of Kikuube and Hoima districts in Western Uganda, the atmosphere feels different. The lake, which lies along the border of Uganda and the Democratic Republic of Congo, has been source of upheaval in this Bunyoro sub-region.

In the past years, the Sebigoro landing site in Kikuube has been one of the many points of entry for illegal immigrants from the DRC.

“The Congolese started coming to this area many years ago as individuals looking for manual work. When they found unused land near the lakeshore, they started settling there one by one, and before we knew it they were in large numbers,” said Jackson Wabyona, the former chairman of Hoima district.

Oil discovery
The influx of Congolese immigrants has been blamed for land conflicts that have rocked the area, especially following the discovery of oil and gas in the region in the late 2000s.

“The issue of the porous borders along Lake Albert is a big problem in this region. The government has not deployed enough security personnel along the lake and yet there isn’t a single border post along the entire 264-kilometre stretch from Delta to Ntoroko,” said Apollo Rwamparo, the second deputy prime minister of the Bunyoro-Kitara Kingdom.

Rwamparo says “land grabbers” are taking advantage of the laxity by border security and the fact that most of the land in Bunyoro is ancestral and not titled.

In 2014, more than 200 families — most of them said to be Congolese settlers — were forcefully evicted in Rwamutonga in Hoima where the government planned to construct an oil-waste treatment plant.

More land wrangles and evictions have been registered in areas such as Kapaapi and Lenju — majority of them involving Congolese immigrants. The current Uganda Lands Commission chairperson, Beatrice Byenkya, in 2017 was involved in a land wrangle with more than 5,000 squatters — the majority of them believed to be Alur immigrants from the DR Congo — over a 1,294-hectare piece of land she claims to have bought in 1986.

The Bunyoro-Kitara Kingdom has also been a victim of the region’s land conflicts. According to Rwamparo, “thousands of Congolese” immigrants who settled on the kingdom’s land that was later taken over by the government for the construction of the oil refinery and the new Hoima International Airport ended up benefiting from the government’s compensation after claiming ownership of the land.

“The government compensated people who were not entitled at the expense of those that were entitled,” Rwamparo said.

“Now we’re engaging the Ministry of Lands for a re-evaluation of that land, which is in thousands of hectares.”

While the government puts effort in protecting the country’s busier borders such as Malaba and Busia, the same cannot be said of the western Uganda-DRC border.