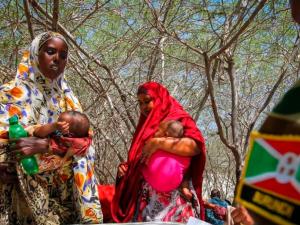 There is nothing pretty about war. It is a calamity that all nations should try to avoid at all costs. But for the people of Burundi, war is a reality that has been all too familiar for many years since the country’s independence in 1962.

For decades, generations of citizens had to endure successive cycles of conflicts that claimed many lives, stunted the country’s economy, and took away even the prestige of being called Burundian.

Then, in the middle of a very long process of the country’s struggle to break with its bloody and strife-leaden past, and just a few steps away from embracing peace, Burundi stepped back into another war, this time on an even more dangerous battlefield, 2,356 kilometres away in Somalia’s capital Mogadishu.

The mission was to confront the Al-Shabaab, variously referred to as militants and terrorists, a fierce lot known to be bound by no rules, and who wouldn’t hesitate to send rockets and suicide bombers to decimate their perceived enemies.

Legends and heroes
Surprisingly, this perilous mission has turned out reasonably well for Burundi. As in every war, it is not only the victory that fascinates but also the legends that develop around the heroes of the battlefield, whether they return home or not.

In Burundi, if you want to listen to war stories from Somalia, then you would be well advised to visit Somariya. This is a new neighbourhood in Camara, in the north of the commercial capital Bujumbura. You will straight away notice a striking feature here: row upon row of beautiful, new houses. If you ask who lives there, the answer is likely to be cryptic, yet comprehensive, as if explaining everything: “Peacekeepers.”

After their tour of duty as part of the African Union Mission in Somalia (Amisom), the returning soldiers bought land in this area and built beautiful homes. Somariya, which acquired its name from the soldiers’ last battlefields of Somalia, maybe home to well more than 10,000, according to Nizigiyimana Alexis, chief of Carama Quarter in Kinama Zone, Ntahangwa Commune of Bujumbura Mairie.

During my visit to Somariya, I met Bosco Murwaneza, a 43-year-old former rebel and now a member of the Burundi National Army. He recalls those early days of the peacekeeping mission in Somalia. It was not easy.

“Some of our compatriots fell on the battlefield. Their courage and sacrifice helped Somalis in various parts of that country to live in freedom and safety,” he proudly told me.

He was full of praise for the mission, which allowed him to learn new skills, right from pre-deployment training. He believes this has made him proficient in his work.

“What I learned was new to me. We had not learned anything about tactics and the norms of peacekeeping while fighting in the bush.”

For Murwaneza, the benefits went beyond new skills and training.

“I was proud to have contributed to the work of peace far from my home country. But beyond the sacrifice and achievements in the field, I was happy that I came back home with resources to help improve the living standards of my family. I was able to build a house in the city of Bujumbura and buy a piece of land to farm. None of this would have been possible without the peacekeeping work.”

How it all started
Former Burundi president Sylvestre Ntibantunganya is perhaps the best person to speak about the country’s troubled history, as he was in office between 1994 and 1996, a time of crisis and successive wars.

He also actively participated in Burundi’s peacebuilding process and was well acquainted with the details surrounding the decision to send Burundian troops on the Somalia peacekeeping mission.

“The idea was inspired by a desire to pay back the debt that Burundi owed to the international community for supporting the peace process in the country. I remember at that time, there was a discussion in Parliament whether it was the right thing to do, or if the idea was compatible with the constitution,” said Ntibantunganya, noting that the Burundi government understood quite early that the decision to deploy to Somalia would have a positive impact and did what was needed to deploy the first battalions.

In 2007, when Burundi deployed its first peacekeeping troops, the country was just emerging from a civil war that had lasted for a decade and had pitted rebel groups against regular army soldiers.

The war had been sparked by the October 21, 1993, assassination of Melchior Ndadaye, Burundi’s first democratically elected president. There followed years of fighting that killed an estimated 300,000 people, and coups and counter-coups.

Peace talks that started in 1995 and were mediated, first by former Tanzanian president Julius Nyerere and after his death in 1999 by South Africa’s Nelson Mandela, resulted in the Arusha Agreement signed in 2000 but finally concluded in 2001. The civil war effectively ended with the signing of an agreement initiated by President Domitien Ndayizeye in 2003.

To an outsider, Burundi’s decision to send its soldiers on a peacekeeping mission did not make much sense. Here is a country that was itself fresh from needing the help of peacekeepers, first in the form of the African Union Mission in Burundi (Amib), deployed in 2003 during the latter stages of the civil war.

Amib was replaced by the United Nations Operation in Burundi (Onub), with a mission to “support and help to implement the efforts undertaken by Burundians to restore lasting peace and bring about national reconciliation, as provided under the Arusha Agreement,” and which completed its mandate on December 31, 2006, and was succeeded by the United Nations Integrated Office in Burundi (Binub).

But for the leaders of Burundi, this made perfect sense. The chance was a godsend to help the country resolve the problems that peace had brought.

The peace agreement stipulated that some soldiers be demobilised to give room to rebels, who were supposed to be absorbed into the national army. This presented a huge problem of finding funds to compensate the demobilised soldiers and pay the salaries of the new soldiers from the rebel ranks. There was also the question of how to address the disappointment and frustration of the soldiers who would be asked to leave prematurely.

Peacekeeping abroad, stabilisation at home
Another serious problem was how to foster unity and inject professionalism into this army that had just emerged from a long civil war and had been cobbled together to include fighters without any formal military training, just guerrilla warfare.

According to analyst Jean Claude Nkudwa, the peacekeeping mission was important for Burundi because it allowed the army to benefit from the professionalisation process and training programme supported by partners such as the US-backed Africa Contingency Operations Training and Assistance, which trained Burundi soldiers on peacekeeping, with great focus on human rights. This meant that both the former rebels and former regular army soldiers benefited from international-standard training that led to the true unification of the army.

Burundian researcher Gerard Barantamije believes the deployment of Burundian troops in 2007 eased tensions in the army as it stopped, at least temporarily, forced demobilisation. Another benefit was that it offered financial opportunities to both the military, which did not have to pay the salaries of the deployed soldiers as this was taken care of by the mission, and the soldiers, who earned considerably better pay.

Therefore, it is not surprising that when the opportunity to participate in peacekeeping was presented, the country’s top leaders were agreeable. They realised that the army would benefit tremendously – both financially for the soldiers, and in the post-crisis context that required that some soldiers be demobilised.

“The Burundi army halted the demobilisation process because of the expanded opportunities to serve in a peacekeeping mission. Troops that were going to be demobilised were given a chance to participate in the peacekeeping mission. They returned from their mission having acquired financial stability and were content to be demobilised. The process was done with their consent and prevented frustration and social insecurity. The benefits were enormous,” said Nkundwa.

For Ntibantunganya, the role the peacekeeping mission played in unifying the army that now brought together former foes was invaluable.

“Being on the same battlefield facing the same enemy (Al-Shabaab) contributed on a deep level to the cohesion of the troops formed by newly integrated members from rebel groups and their former opponents from the regular army.”

Not been rosy
It has not been all rosy for the Burundi peacekeeping contingent, which has over the years suffered heavy losses as Al-Shabaab militants targeted peacekeepers that helped to throw them out of Mogadishu in 2011.

However, the anticipated benefits embodied in the enhanced capacity and cohesion of the new army, with a focus on a new code of ethics, and the new neighbourhood of Somariya in Bujumbura seem to have been compelling reasons to support that first peacekeeping deployment 14 years ago.

The diplomatic outcome
Murwaneza estimates that the peacekeepers have built more than 200 houses in the Somariya neighbourhood.

“I was among the first to relocate here. At that time the neighbourhood was not so nice. I remember when I bought the land, a friend told me that I was wasting my money. However, other peacekeepers slowly built their homes and the place has now become one of the most beautiful corners of Carama,” he said.

Barantamije noted that the Burundian contribution to Amisom and the intense international military cooperation it provoked have had repercussions on the diplomatic stage in Bujumbura and the region.

It gave Burundi the leverage it needed to transform its international status from that of a “failing state” to one of peacebuilder.

The Burundian army's good reputation abroad has brought invitations to other peacekeeping missions in other conflicts. Burundian peacekeepers are currently deployed in the Central African Republic and South Sudan.

According to Nkundwa, Burundian troops are ranked the among the most proficient in peacekeeping missions, especially in Amisom.

He reckons that the good reputation has increased the visibility of the country and improved its image. He said he believes that this did not change even during the 2015 crisis, which led to fighting as a result of President Pierre Nkurunziza’s push to hang on to power.

“The reputation of the army in peacekeeping remained strong and this contributed to reinforcing the belief of Burundi as a country that is contributing to stability and peace, rather than a victim of internal conflict,” he said.

Ntibantunganya is convinced that the diplomatic benefit of the Burundi peacekeeping mission went beyond the financial aspect to confer a strategic edge that allowed some Burundians to be promoted to positions of responsibility in continental and international organisations.

“The work of Burundian peacekeepers has helped to reverse the image of Burundi from a post-conflict country in need of assistance to a peacebuilding state that can offer assistance to others who are worse off,” explained Barantamije.

“The next generation might not grasp all the ramifications of the situation at the time and the sacrifices the first peacekeepers made, but if they ask why there is a Somariya in Bujumbura, former Burundian peacekeepers can share their memories of how we transcended our differences in order to fight a common enemy for the good of Africa and humanity,” said Murwaneza when asked what he thinks the neighbourhood will stand for in years to come.