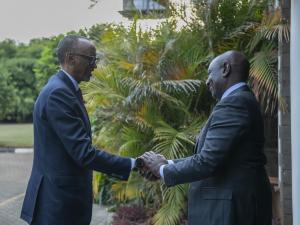 President Paul Kagame on Monday arrived in Nairobi, Kenya where he is expected to join other Heads of State and Government from across the region, continent, and beyond for the swearing-in of President-elect Dr. William Samoei Ruto of Kenya scheduled for today at the Moi International Sports Centre, Kasarani.

The Head of State arrived in Nairobi on Monday afternoon and met President-elect, Dr. Ruto, with whom he held talks at his Karen Office, in Nairobi County. In a tweet, Dr. Ruto hailed the bilateral relations between Kenya and Rwanda, promising that his government will work to strengthen the ties even further.

“Kenya and Rwanda have a long-established relationship based not just on geography but mutual interests and long-standing partnerships on economic and security issues. We will seek to build and expand our cooperation for the mutual benefit of the citizens of our countries,” the incoming Kenyan Head of State tweeted.

In Nairobi, ahead of the ceremony, President Kagame met and held talks with President Nyusi of Mozambique on a number of areas of cooperation, including security.

Kenya’s Supreme Court on September 5 ruled that William Ruto was properly elected president, dismissing several petitions led by his rival, Raila Odinga, seeking to annul the result of the 9 August election, alleging that there had been massive fraud.

On Monday, Odinga turned down an invitation to attend the inauguration, stating that his is out of the country, but also added that he believes that the country’s Independent Electoral and Boundaries Commission (IEBC) did not conduct a free and fair election and that the ruling of the Supreme Court was not based on facts and the law, though he respected it.

His statement posted on Twitter drew mixed reactions as Kenyans bashed the veteran opposition leader for refusing to concede defeat and be part of the democratic transition which has excited millions of Kenyans.

Dr. Ruto garnered 50.5% of the vote in the closely fought election against 48.8% for Mr Odinga, who was backed by the outgoing President Uhuru Kenyatta. Ahead of the swearing-in, President Kenyatta on Monday met with the President-elect for the first time and promised a smooth transition as he oriented Ruto around State House Kenya, together with the First Lady, Margaret Kenyatta.
https://www.ktpress.rw/2022/09/president-kagame-in-kenya-for-president-e...