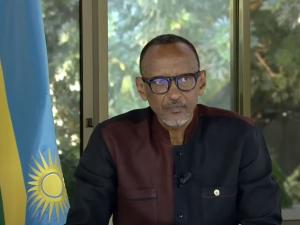 The Head of State, who was speaking during an interview on Rwanda Television (RTV) on Monday, said that would not be bothered by not being part of the regional joint force as long as those going commit to solve the matter holistically.

President Felix Antoine Tshisekedi recently said that his country cannot allow Rwanda to be part of the joint force, over claims that Kigali backs the M23 rebels who recently took up arms again against the DRC government.

The Head of State said that DRC has chosen to use Rwanda as a scapegoat for internal problems it has failed to solve, particularly the issues of Kinyarwanda-speaking Congolese who accuse the government of reneging on its commitments.

Asked what Rwanda has to say about the composition of the joint force, President Kagame said that, in fact, Rwanda not participating would save the country a lot of resources.
“We are all new if my memory serves me well but Rwanda was in the East African Community before DRC. But that’s okay. We are all members of East African Community,”

“So, when they are talking of East African Community Force, naturally that implies Rwanda as well, right?” President Kagame said, adding that if the concerned, the DRC in this case, claims it has problems with Rwanda participating, he has no problem with that.
“We are not begging anyone that we participate in the force. Alright. But what that also means, whoever goes there, whoever is liked or is invited by DRC as part of the East African Community Force, excluding Rwanda, must address these problems I was talking about,” President Kagame.

In the interview, President Kagame said the issues stem from long term internal problems, which the DRC has failed to act upon, mainly concerning the grievances of Kinyarwanda-speaking populations fighting for their rights.
He pointed out that if anybody’s coming from anywhere, excluding Rwanda but is coming to provide a solution that everyone is looking for, which is peace, Rwanda wouldn’t have a problem with that.

President Kagame said that he is in favour of whoever is going there resolving the issues right from the root cause and the same issues that continue to cause problems between Rwanda and DRC.
He said that would involve addressing the issues in Eastern DRC, more importantly absorbing Kinyarwanda-speaking Congolese, who include M23 fighters, into the Congolese society and giving them their rights and assets as citizens of DRC.

President Kagame said that should be a normal thing for anybody to understand and do, as it is the only assured way to end the conflict but if the issue continues to be disregarded, then the problems will continue recurring.
“These people have no reason to keep fighting or causing any trouble,” President Kagame said, adding that the EAC intervention should focus on addressing the political issues inside DRC which are the main cause of conflict.

“I would want to have a problem with this if this force gives guarantees to Rwanda that no more shelling from Congo, of our territory by Congolese force or by FDLR,”
“Why would I be opposed to that? In fact, I’m very happy that this can be done without our involvement because getting involved is a cost to us also. Why would I incur the cost if I am having somebody saying ‘no, I’m happy to do it for you. I have no problem with that. Absolutely.” President Kagame said.
https://www.ktpress.rw/2022/07/president-kagame-says-rwanda-wouldnt-mind...