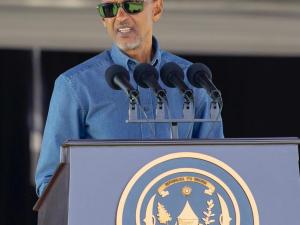 It is a beautiful end of the week in Southern and Western Provinces as President Paul Kagame dedicated a four day citizen outreach in this part of the country, the first one in two years.

President Kagame started the outreach in Ruhango district, Southern Province this morning and will proceed with Huye, further south before heading to Nyamagabe district.

President Paul Kagame in Ruhango district
In Western Province, the president will make a stopover in Rusizi district and then visit Nyamasheke district. He will conclude the visit in Karongi district on the shore of Lake Kivu, August 28.

The president was welcomed by a huge crowd of cheering citizens. He said, he missed them since he visited them before the spread of COVID-19.
“I know you also missed me,” he said after congratulating them for being resilient during the fight against the pandemic.
https://www.ktpress.rw/2022/08/president-kagame-starts-citizen-outreach-...