President Kagame’s Answers Give Us Wings 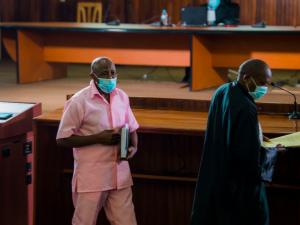 There is an inspirational advert which runs on the Super Sport Channel of South African Digital Satellite Television (DStv). It says, “Red Bull gives you wings”. Red Bull is an energy drink sold by Red Bull GmbH, an Austrian company. In the same vein, some of President Paul Kagame’s answers to provocative questions ‘give us wings.’

Take for example this comment by a Radio France Internationale (RFI) journalist Alexandra Brangeone, as she rather unconsciously set the President up nicely with an assist-like question: Are you saying why do people make a lot of noise? Also, I think probably because of the way he was arrested. He says he was tricked into coming to Rwanda…

She could not finish, as he did not let her. The answer itched as it came out running. A screamer it was: What is wrong with tricking a criminal you are looking for? When you get him, where do you put him? If it is a court of law, I think that is okay. This kind of answer, like Red Bull energy drink, ‘gives you wings’, thank you Mr. President. You will remain our role model when it comes to telling it as it is.

This was on the arrest, incarceration, and subsequent on-going trial of Paul Rusesabagina. Marc Parelman of FRANCE 24 and Alexandra Brangeone of RFI, were interviewing the President. Both the lady and the gentleman seemed to enjoy the ride with the Head of State, as they echoed a narrative commonly heard from most of the West’s bullish media outlets. Credit to FRANCE 24 and RFI for giving President Kagame a roof top media stage to address the community of mockers. And trust him to seize the moment. He answered the seemingly rhetorical questions constantly thrown at him in a way that at a certain point towards the end necessitated he removes the gloves and goes bare knuckles with honesty. It was quite a match.

Now Let us dwell on this for a moment longer and ask ourselves simple questions: how much value do those other media organizations and their kin in some Western governments really have for Africa? Which moral authority do they even have left to act on sincerely? Look, it is they who along with the UN Mission looked the other way, turning their backs on Rwanda to fend for themselves in the middle of a Genocide in 1994. To that catastrophic event of 27 years ago, add the miserable failure in the eastern Democratic Republic of Congo that the UN has infamously been part and parcel. The world’s peace-keeping body has only stopped short of throwing in the towel. You would expect that Western media are sensitive to this shameful record of events. But they largely have not. Instead, you often hear them lecture Rwanda on matters of governance, and you wonder where and how they find the audacity to do so!

Towards Rwanda, given the historical background where the mighty West let the country down, we would expect their powerful media to understand and at the least be fair. Sadly, not only have they refused to be fair, but they blatantly continue to side with the aggressors, on their behalf asking arrogant, demeaning, and insensitive questions in a patronizing and self-righteous tone, under the guise of media independence. I think it is possible to do the right thing supporting Rwanda, in the same way Israel is getting Western media support as it purges Gaza of the fundamentalist Hamas.

What value is derived from unashamedly rallying behind the campaign to release without trial a Rwandan terrorism suspect who you had hurriedly and undeservedly crowned a hero? Rwanda would be willing to stomach the out of context questions, only if the right value were to be given to explicit and honest answers Kigali provides every day. The West should not allow itself to be perceived as though they were sitting back and enjoying the show as their media powerhouses ask of Rwanda denigrating questions. The scenario seems to clearly affirm the presence of ugly, unseen, synergized resources from governments, media, and civil society to strategically keep us in our place. C’mon West; is Rwanda not supposed to be your strong ally?

The utmost gratitude to France for standing up to be counted among the reformed. The commitment to no longer being seen by Rwanda as the Zone Turquoise relocation is commendable. The reconsideration is timely. Rwanda will certainly be looking forward with anticipation to engage in mutually meaningful bilateral relations once again. President Kagame commended France for this new spirit of political morality, respectability, and willingness to be sensitive as the case should always be. Behind the President, Rwandans are, besides being supportive of the diplomatic initiative, certainly keenly watching to see whether this long-awaited revival of sobriety will carry on for posterity.

Kudos to President Kagame for the historic interview. Back home we felt strongly cared for in a territory gallantly guarded. That classic performance left many a Rwandan proud. Thank you for being our energizer. You are such an inspiration. You gave us moral wings, so to speak, posing that question: “What is wrong with tricking a criminal you are looking for?” From now onwards, may the question-cum-answer be the bold response from every Rwandan who encounters the naïve query on the legality of tricking Rusesabagina into arrest. May God help us.