President Magufuli hints at not changing his appointees 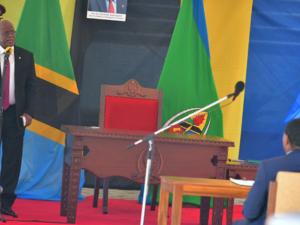 Dodoma. President John Magufuli has on Monday November 9 said that he will continue with his appointees unless something bizarre happens to force him to reappoint someone.

“There is a tendency that each time a new administration comes into office, there is tension especially amongst civil servants because of the possible changes, right now I see there is tension amongst the RCs and DCs. I wonder why they are worried,” said the President.

The Head of State was speaking at State House Dodoma at the swearing in of the Attorney General Professor Adelardus Kilangi.

He added: May be if someone chooses to leave on his own or has reached retirement age, or his performance just doesn’t match the speed that we want go with. All I have to say go and serve the people.

The President, however, said the only changes that are inevitable is the cabinet, saying, ‘some will return but some will not, now I have wide field of many MPs to choose from’.

Earlier on he told the AG Tanzanians are hungry for progress and would not love to see loose cases in court.

“They want to see cases that involve government in court are solved as soon as possible. You have done well in the past and that is why on behalf of Tanzanians we found it fit to give you another term,” he said.