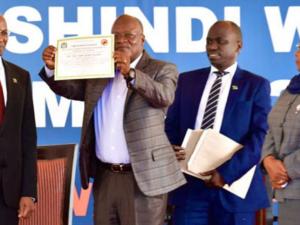 In his speech after receiving the certificate, the president said he is indebted to Tanzanians as he takes power for a second five-year term.

He promised to work with opposition candidates in his bid to deliver to the expectations of the people whom he thanked for his landslide victory.

But his win has been contested by top opposition parties which claim the presidential election was rigged.

“I thank Tanzanians for electing us in the second and final term. May God help me now to deliver what they expect,” said Dr Magufuli after receiving the certificate.

On Friday, the National Electoral Commission (NEC) declared him the winner in the General Election.

Chadema and Alliance for Change and Transparency-Wazalendo (ACT- Wazalendo) said they did not accept the results and asked Tanzanians to protest through peaceful demonstrations starting Monday.

But 10 other presidential candidates who participated in the elections said they were free and fair and congratulated Dr Magufuli for his victory.

They even attended the Sunday event held in Dodoma and congratulated the president.

“We have already issued a statement to accept the results and Dr Magufuli is the winner,” said one of the candidates, Ms Queen Sendiga (ADC), who spoke during the event.

“The elections are over and let us now concentrate on building the nation. We will give Dr Magufuli our moral and material support whenever he needs it.

Tanzanians need development and for us to achieve that we need to maintain the prevailing peace,” she added.

Ms Sendiga also used the platform to ask the government to consider giving grants to political parties which are not represented in Parliament as a way of sustaining them.

Dr Magufuli said this year’s elections were “well organised” and results were delivered in about 48 hours for the first time.

“Ballot boxes were delivered in time to all polling stations and the materials put into consideration the needs of people with disabilities. Technology has also probably helped NEC to deliver the results as quickly as possible,” said Dr Magufuli.