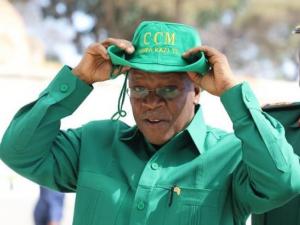 CCM presidential candidate John Pombe Magufuli has taken a short break on his schedule after 10 days of none stop rallies after the first leg of the campaigns ended on Tuesday in Geita.

The president held a rally in Geita town before moving Katoro, Buseresere and other points where he stopped on his way to his home town of Chato.

Chama Cha Mapinduzi (CCM) secretary for ideology and publicity Mr Humphrey Polepole said on Friday that the first phase was successful and that the next round will resume on Monday, September 14.

“This time our campaign is being done scientifically and we are strategically allocating influential people in different zones of the country,” he said at media briefing today.

“We have also conducted an opinion poll through our party's research unit and in collaboration with other think tanks in the first 10 days and found that if we were to go to polls today, Magufuli would win by 85 per cent,” he added.

Tanzanians will vote on October 28 this year to elect the president, MPs and ward councillors.

Dr Magufuli who is seeking re-election is facing 14 presidential candidates from the opposition including Chadema's Tundu Lissu who returned from Belgium in July to vie for presidency.