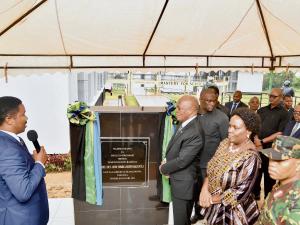 Dar es Salaam. President John Magufuli yesterday demanded increased accountability of leaders responsible for overseeing the education sector as he revealed the reason for sacking the Geita District executive director (Ded).
He said leaders should strive to end challenges in the sector and ensure that value for money is realised in implementing various educational projects.
Dr Magufuli was speaking in Bukoba, Kagera Region during the launch of the Sh10.9bn Ihungo Boys High School rebuilt after being badly destroyed by the 2016 earthquake.
Earlier, he had laid the foundation stone for the construction of a Sh22 billion Vocational Education and Training Authority (Veta) regional college.
Addressing the public in a live televised event, Dr Magufuli said despite the presence of a regional commissioner, district commissioner, Ded and a professor of Education as the constituency’s legislator, Barango Primary School in Ubungo District had damaged classrooms and pupils were still sitting on the floor due to shortage of desks.
“I commend a journalist who exposed the rot on social media because there is no politics there like what district leaders wanted the public to believe. These are issues I would like to know about,” he said.The President added: “I’m speaking from Kagera, but when I go back to Dar es Salaam, I want to find construction of classrooms to have been completed and pupils no longer sit on the floor.”
He promised to visit the school believing that his message has been sent and delivered. Dr Magufuli expressed frustration to have unaccountable appointees at the ministerial level, regional and district commissioners and Deds despite having set budgets and making revenue collections.
“That’s why I randomly inspected the classrooms here instead of visiting the scheduled ones. Fortunately, all classrooms have desks, I hope those in Ubungo have received the message,” he said.
He revealed that the Ded in was sacked after procuring a Sh400 million luxurious car while citizens are told to contribute for the desks and spent funds donated by a mining firm for purchasing other vehicles. The President said he would be in a difficult position if the Sh10.9 billion set for re-construction and rehabilitation of the school would have been poorly supervised as critics in 2016 wanted the money to be distributed among citizens. The government was building 33 Veta colleges across the country capable of accommodating 65,640 students including the one commissioned yesterday.
He said Veta colleges have increased from 672 in 2015 to 712. Sixty two were owned by the government.
“They can admit 226,767 students, which is up from 96,997 in 2015 including 56,400 that could be admitted in government colleges alone,” he said.
Dr Magufuli referred China and the UK as true friends of Tanzania saying today the government,  UK, US and Australia would sign the Kabanga Nickel project that will be implemented in Ngara District.
“The project will involve a multimillion dollar investment expected to generate more jobs for Tanzanians,” he said.The minister of Education, Science and Technology, Prof Joyce Ndalichako, said in reconstructing and rehabilitating the school the UK and the government contributed Sh6.1 billion and Sh4.8 billion respectively.
“After completing the projec by the Tanzania Building Agency (TBA) under the supervision of the Tanzania People’s Defence Forces 1,152 students can now be accommodated at the schools as compared to the previous 640,” he said.