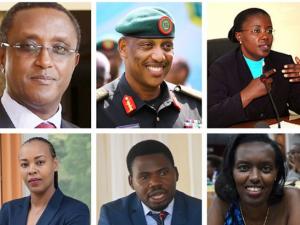 President Paul Kagame has moved Minister Vincent Biruta from Ministry of Environment to replace Dr. Richard Sezibera as Minister of Foreign Affairs and International Cooperation in a major cabinet shake up Monday evening.

Dr. Jeanne d’Arc Mujawamariya bounces back into the cabinet and will replace Biruta in the environment Rwanda Environment Management Authority (REMA).

Mujawamariya has until her appointment been Rwanda’s envoy to the Russian Federation.

The president who is also commander in Chief of Rwanda Defense Forces moved General Patrick Nyamvumba from the position of Chief of Defence Staff and appointed him Minister of Internal Security. This Ministry is reintroduced after being removed from Cabinet list a couple of years ago.

The Ministry of Sports was separated from Culture portfolio and it was entrusted to Aurore Mimosa Munyangaju a new cabinet member and she replaces Esperence Nyirasafari, who is in the Senate where she was recently elected vice president in charge of legislation and government oversight. Munyangaju has been Chief Executive Officer at Sonarwa Life Assurance Company Ltd.

This Ministry has got a State Minister in the person of Edouard Bamporiki who has been serving as chairman of National Itorero Commission.

Ignacienne Nyirarukundo who was a member of Parliament at lower chamber has been moved to the Ministry of Local government as State Minister in charge of social affairs.

She is replacing to this post Dr. Alivera Mukabaramba who was appointed senator last month. She is currently vice president at the senate.

Dr. Rose Mukankomeje who was dropped from the Rwanda Environment Management Authority has come back in the public service as Director General of High Education Council replacing Emmanuel Muvunyi who was removed from this position last month.