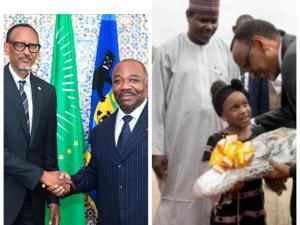 President Paul Kagame on Monday paid a visit to his Gabonese counterpart President Ali Bongo Ondimba, with whom they held discussions at Palais de la Renovation in the capital Libreville.

During the visit, President Kagame said he was happy to be in Gabon, a visit he said was part of efforts to strengthen bilateral relations between the two countries.

The President said that part of his visit to the central African country was to check on his counterpart who has been ill.

“Gabon has been central to African interests, vision and the strategy to achieve that vision. President Bongo has been very active working with other leaders on our continent to make sure we raise our level of development,” Kagame said.

Kagame also spoke about the Continental Free Trade Area (AfCFTA) agreement which came into effect early this month, saying that there has been significant progress since its inception.

“We have reached the number of countries required to ratify for the agreement to take effect. Even the others who have not ratified, it’s not because they are not interested or don’t see the necessity.

“It is just because they have difficulties, whether legal or technical, they need to overcome before they participate,” he noted.

After Gabon, Kagame continued his visit to Nigeria where he is expected to speak at the country’s National Democracy Day Anti-Corruption Summit.

President Kagame has arrived in Abuja, Nigeria where he will begin his two day visit with a Keynote address alongside President Muhammadu Buhari @MBuhari at the National Democracy Day Anti-Corruption Summit @officialEFCC

At the invitation of his counterpart President Muhammadu Buhari, Kagame, who is in Nigeria for two days, will give insights on Rwanda’s war on corruption.

Corruption index reports by Transparency International puts Rwanda among the three less corrupted countries in Africa for the last 2 years.

The country was also the first in Africa to introduce the e-procurement system in 2016.

On the other hand, Nigeria stands on the 144th position of Transparency International’s 2018 corruption index.

The position, according to several reports, has been triggered by corrupt leaders – who emptied state coffers.

For instance, a report by United Nations Office on Drugs and Crimes (UNODC) indicate that between 1960 and 1999, corrupt leaders in Nigeria ran away with $400 billion and deposited it in foreign bank accounts.

On the second day of his visit, President Kagame will attend the official inauguration ceremony of President Buhari who was reelected in February of this year.