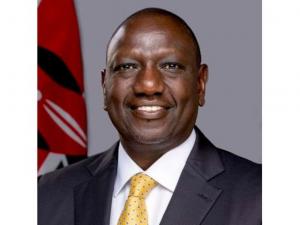 President William Ruto has unveiled a presidential portrait that is different from those of all his four predecessors in design and quality.

The portrait, unveiled on Tuesday during his inauguration at Kasarani stadium, has the Kenyan flag in the background – a design that mirrors a tradition adopted by American presidents since 1961.

In a break from tradition, President Ruto becomes the first head of state in Kenya to have the flag as part of his official portrait, whose quality is also the first three-dimensional (3D) model.
His predecessors Jomo Kenyatta, Daniel Arap Moi, Mwai Kibaki and Uhuru Kenyatta had a clear background in their official portraits, but Dr Ruto has taken advantage of new technology in photography to design his.

And just like in the portraits of the past 12 presidents of the United States, including the current President Joe Biden, Dr Ruto’s portrait has the Kenyan flag on the right-hand side.

Stop calling, allow us to settle, David Ndii tell Kenyans
The portrait, captured by the renowned South Sudanese photographer Emmanuel Jambo, made its debut to the official State House Twitter page immediately after Dr Ruto was sworn in.

After Chief Justice Martha Koome handed over the certificate of inauguration to the new President, his standard flag was also uploaded to his social media pages.
As is the tradition, the portrait of former President Kenyatta was replaced with that of Dr Ruto in major government buildings, offices, Kenyan embassies and foreign missions.

Even though some US presidents had their portraits drawn by artists and unveiled long after they left office, John F. Kennedy, the 35th president, was the first American leader to adopt the flag in the background of his official portrait in 1961.
All his successors have maintained this tradition, with the White House dedicating a wall where the portraits are unveiled and hung.

KOT and the nicknames they have given Kenyan politicians
The hanging of a head of state’s portrait in government offices and business premises has been a tradition in Kenya since independence, but there is no legal requirement under the Constitution to do so.

In 2016, the Ministry of Interior issued an advisory cautioning traders against removing President Kenyatta’s portraits in rebellion, following directives issued by the opposition under former Prime Minister Raila Odinga.

Former Siaya governor Cornel Rasanga had asked residents to replace Mr Kenyatta’s portraits with those of Mr Odinga. Consequently, the ministry noted that it would fine those found contravening the directive.
“The government will impose a penalty on all citizens who do not comply with the notice,” read its statement.

Kingi represents President Ruto in first official assignment outside Kenya
The directive caused an uproar on social media, forcing the State House to issue a statement rescinding the orders.

The State House spokesperson at the time, Manoah Esipisu, clarified that it was not mandatory for citizens to see the President’s portrait.
“No one is forcing anyone to do anything. I think portraits have been up in terms of existing tradition… and it is one that we are not fleeing away from,” he stated.

Article 9 of the Constitution identifies Kenya’s national symbols as the national flag, the national anthem, the coat of arms and the public seal. The President’s portrait is not listed as one of the symbols.
The National Flag, Emblems and Names Act also does not list or require citizens to display the President’s portrait.
https://nairobinews.nation.africa/president-ruto-breaks-from-tradition-w...