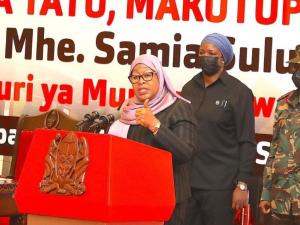 The Head of State said concerns about the country’s burgeoning national debt were misplaced.
She was speaking at the signing ceremony of the extension of the SGR construction contract held at the State House in Dar es Salaam.
Reiterating that the Government will continue to borrow to complete the construction of the more than 1000km railway line, Samia noted that critics were losing sight of the ultimate benefits of the critical infrastructure.

The contract signed today is for the construction of the 368 km stretch from Makutupora in Dodoma Region to Tabora at a cost of $1.908 billion (Sh4.41 trillion). The contract was between Tanzania Railways (TRC) and Turkish contractors Yapi Merkezi who have also done the Dar-Morogoro section.
“As I said the investment so far is Sh14.7 trillion so if we do not carry on with the construction and complete it, the money we have invested will be worthless. So either way we will have to continue (borrowing)… we will look for simple, effective ways to borrow,” said President Samia.
Her defence came hot in the heels of Speaker of National Assembly Job Ndugai's attack on what he described as insatiable appetite for loans by the government.
The Speaker appeared to criticise continued government borrowing of foreign loans for local development projects.
"We have to question whether this trend is sustainable ....we risk the country being auctioned owing to its indebted," warned Mr Ndugai in his uncharacteristic criticism of the government.
According to Ndugai, Tanzania would rather raise domestic taxes to fund its own development budget, arguing at Sh70 trillion, the national debt was a huge and dangerous burden.
The Speaker made reference to recently introduced mobile tax as an example, arguing that Tanzanians must be ready to shoulder the cost of their own development and not rely on the expensive foreign loans. He spoke at a different event in Dodoma.

But in her indirect response (She did not mention names), President Samia noted: "There is no way.. how we can raise this money through mobile money transaction levies or the taxes that we collect internally, we must borrow to complete this project.”
The President said she would not let the projects stall for lack of funding, saying it would be a waste of tax payers money already sunk in the SGR.
"There are efforts to stall us over the debts but I want to assure you that will fail as no project will be abandoned," she said.

According to her, Tanzania's case was not unique as even rich nations continued to borrow to develop.
Ndugai spoke at the second general assembly of Mikalile Ye Wanyusi members held in Dodoma, Ndugai defended Parliament's decision to introduce levies of mobile money transaction fees, rather than continue borrowing.
“Recently the President borrowed 1.3 trillion and there was ululation ..is it better we Tanzanians of 60 years of independence are more and more indebted to the foreigners? Let us build our nation without these huge and incomprehensible debts. When will we do it ourselves and how',”said Speaker Ndugai.
He said it was shameful for Tanzania to continue borrowing happily.
"Now in 2025 you will decide, if that is the way to run the country now our debt is Sh70 trillion. That is not ‘healthy’. One day the country will be auctioned off,” said Ndugai.

Tanzania secured about $3 billion in loans in the first nine months of President Samia Suluhu Hassan’s leadership, with commentators attributing this to improved relations with development partners.