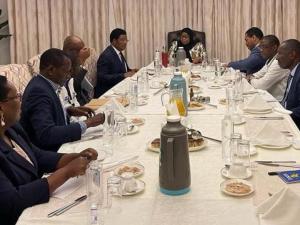 ar es Salaam. President Samia Suluhu Hassan has directed ministries and authority responsible to address immediately fuel price hike and come up with a quick solution.
The President was speaking at an emergence meeting held at State House Dar es Salaam in the late hours of Sunday night.
The meeting was attended among others by Prime Minister Kassim Majaliwa, Energy minister January Makamba, and Finance minister Mwigulu Nchemba.

Others were the Commissioner General of TRA Alphayo Kidata and permanent secretaries from Finance and Energy ministries.
Fuel prices in Tanzania have crossed the Sh3, 000 mark across all three products (petrol, diesel, and Kerosene) in Dar es Salaam, Tanga and Mtwara, according to the latest price list released by the Energy and Water Utilities Regulatory Authority (EWURA).
The most expensive selling point remains Kyerwa district in Kagera region on the border with Rwanda and Uganda where petrol now costs Sh3, 385, diesel sh3,495 and kerosene Sh3,350 per litre.

Precipitated by the US-led sanctions in response to Russia’s invasion of Ukraine, fuel prices in Tanzania have soared, rising by Sh1,000 during the past one year.
This has sent transport costs up, and exerted pressure on the prices of various other goods and services that need to be transported to the market.
Speaking in Parliament on May 6, Energy minister January Makamba said the government was aware of the public outcry over exorbitant fuel prices, and revealed that it was doing everything possible to work on factors that were within its control.
“The cost of fuel in the international market, costs of transporting the product to Tanzania, as well as marketers’ operating costs are not within our control, but taxes and levies are,” he said when the House suspended scheduled business to deliberate on rising fuel prices.