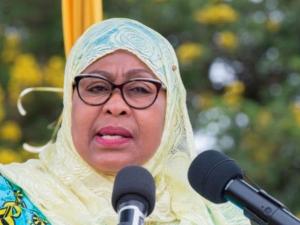 Tanzania President Samia Suluhu Hassan says fired ministers will get other roles in her government, as she tried to lessen the blow on the purged officials.

Speaking after she witnessed the oath-taking by new entrants in her Cabinet, Ms Hassan said she will assign new roles to Mr William Lukuvi and Prof Palamagamba Kabudi, two of the biggest losers in the mini Cabinet reshuffle on Friday.

Mr Lukuvi was dropped from the Land, Housing and Human Settlements ministry whereas Prof Kabudi was the Legal and Constitution Affairs minister.

Kabudi had been Foreign Minister in the government of John Pombe Magufuli, who died last year in March before Samia took over.

In Dodoma on Monday, President Suluhu swore in the new cabinet, permanent and deputy permanent secretaries, chairman of the National Electoral Commission (NEC) and judges of the Court of Appeal at the State House.

Samia said she dropped the two because she saw according to their ages, they will help her in special roles at the statehouse to monitor the cabinet.

Contract negotiations
“Today, I won’t have much to say but will speak on two brothers of mine, Mr Lukuvi and Mr Kabudi, they are of the same age as I am compared to most of those that I have appointed in the new cabinet.

These two have done a good job in their dockets, I dropped them so that they can come help me to monitor the youthful cabinet who need close monitoring,” the head of the state said.

Speaking on Prof Kabudi who once served as the minister of Foreign Affairs and East African Cooperation, Samia said he had done a good job in international business and contract negotiations that Tanzania entered with different organisations in the past.

“In any contract negotiations that the country will need to sign, you will lead the team formed to take care of the matter,” Samia told Kabudi who also was present at the ceremony.

Amid rumours that Mr Lukuvi was left out of the cabinet so that he can join the race for the position of National Assembly Speaker, the President said Mr Lukuvi won’t join the race to replace Ndugai who resigned last week.

“I have a message to those who were happy that Lukuvi was dropped out of the cabinet. Lukuvi is here to stay, he won’t be in that contest. I will assign him a special role, he has done a good job for this country.”

However, the head of the state did not mention the special role that she will assign the Ismani MP at the statehouse.

Mr Lukuvi’s name now ranks highly on the list of CCM loyalists who were rumoured to succeed Job Ndugai as the next Speaker.