Presidential in-tray: What awaits Suluhu on first day in office 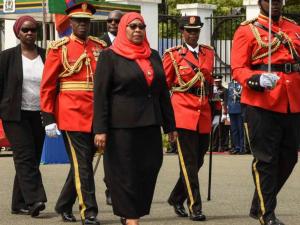 Tanzanian President Samia Suluhu Hassan inspects a guard of honour mounted by the military after she was sworn in on March 19, 2021 at Ikulu, Dar es Salaam. PHOTO | AFP

A critical month lies ahead for Tanzania’s President Samia Suluhu Hassan as she gets down to the business of running a country still in shock following the sudden death of her predecessor John Magufuli.

Signing of key agreements to launch the East African Crude Oil Pipeline – one of Magufuli’s key infrastructure gems – earlier scheduled for March 22 but postponed to April should proceed as planned, but President Suluhu will need to quickly bring herself up to speed with other burning regional issues. These include addressing strained diplomatic and trade ties with some of the other East African Community member states, as well as Tanzania’s overall approach towards regional integration.

Tanzania Private Sector Foundation head Francis Nanai told The EastAfrican that they expect the new president to adopt a more positive attitude on trade ties. He said: “We are confident that President Samia will partner with us in the private sector to improve relations with both the EAC and Southern African Development Community, especially in terms of exports.”

Prominent Tanzanian businessman Mohammed Dewji said he had “great faith” in President Suluhu’s leadership and many private sector players will be looking for signs of rapprochement after bruising run-ins with the nationalist and leftist Magufuli.

Having been thrust further into the wider international spotlight, President Suluhu will also have to address diplomatic challenges that Tanzania experienced during the Magufuli era, including the country’s much-criticised approach to the coronavirus pandemic.

“I look forward to working with you to keep people safe from Covid-19, end the pandemic and achieve a healthier Tanzania together,” Mr Ghebreyesus said in a message on Twitter. Officially, however, the pandemic remains unacknowledged in Tanzania.

The country has not reported Covid-19 case or death numbers since April 2020 (when the record showed 509 positive cases and 21 deaths), and under Mr Magufuli flatly rejected an invitation to join a subsidised, WHO-supported Covax programme to receive Covid-19 vaccines from abroad.

Mr Ghebreyesus on February 20 described the situation in Tanzania as “very concerning” and issued a special call for the country to start taking more “robust” action against Covid-19 including “making preparations for vaccination, sharing important data, and to start reporting Covid-19 cases again”.

Ms Suluhu will come under renewed pressure to acknowledge and respond to the pandemic. Porous borders across the region have seen previous waves of infections quickly spread from country to country.

At the same time, countries like the US, Britain and China — as well as the European Union — will also be keeping a close eye on Tanzania’s approach to international diplomacy under its new leader following previously fractious dealings with Mr Magufuli’s administration.

China, which in the past fell out with Magufuli over unacceptably tough conditions attached to infrastructure development loan offers, recently launched a fresh charm offensive to get back into his good books on the back of his re-election last October.

The new rapport appeared to have been cemented when China’s Foreign Minister Wang Yi visited Mr Magufuli in his Chato hometown in January and made new loan pledges including $1.32 billion to support an ongoing Standard Gauge Railway (SGR) construction project through Tanzania’s central corridor.

Priorities at home include the appointment of a vice president which, to many, will signal whether Ms Suluhu intends to build her own power base in the country and in the ruling Chama Cha Mapinduzi party with an eye on running for another term in October 2025.

Many will be watching to see how President Suluhu responds to political intrigue within CCM resulting from Mr Magufuli’s abrupt death and her subsequent elevation as the country’s first female leader.

The president has spoken of the need to bury political differences across the board and forge ahead as a united nation. Many see this as an early attempt to reach out to the Opposition left out in the cold since CCM swept parliamentary elections last October, and which suffered from repression under Magufuli’s strong arm.

“What we as a country need right now is someone approachable at the helm who will allow for participatory leadership, rather than someone prone to autocratic, on-the-spot decision making,” Prof Shivji said.

He said the new leader’s main challenges include bridging political, ideological and other differences among Tanzanians, and restoring “an environment where people feel free to express their views about matters related to the country’s future without fear or hesitation”.

Prof Shivji acknowledged that the prevailing “male supremacy” mentality among many Tanzanians might set the new president back a little but added that this was the right time to put gender equality arguments in Tanzania to the ultimate test.

“In this real situation, can we, again as a country, rise to the challenge?” he said.