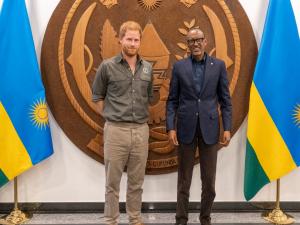 UK’s Prince Harry, the Duke of Sussex is in Rwanda as part of his conservation work with African Parks. The British royal on Monday met President Paul Kagame at Urugwiro Village, with whom he held talks on the work they do in Rwanda.

“President Kagame received Prince Harry, The Duke of Sussex, who visited Rwanda as part of his work as President of African Parks. The Government of Rwanda has agreements with African Parks to manage Akagera and Nyungwe National Parks.

On the same morning, Prince Harry visit Kigali Genocide Memorial to pay his respects to victims of the 1994 Genocide against the Tutsi. At Gisozi, Prince Harry laid wreath on the mass graves where remains of over 250, 000 victims lay in rest.

Prince Harry joined African Parks as President in December 2017, in a move that underscored his commitment to conservation. His appointment was made public in a statement released by Kensington Palace.

African Parks is a conservation NGO, founded in 2000, that manages national parks and protected areas on behalf of governments and in collaboration with local communities across Africa. With 13 parks under management, they have the largest area under conservation for any one NGO on the African continent.

African Parks is a non-profit conservation organisation that takes on the complete responsibility for the rehabilitation and long-term management of national parks in partnership with governments and local communities.

With the largest counter-poaching force and the most amount of area under protection for any one NGO in Africa, African Parks manages 13 national parks and protected areas in nine countries covering over seven million hectares in Benin, Central African Republic, Chad, the Democratic Republic of Congo, the Republic of Congo, Malawi, Mozambique, Rwanda and Zambia.