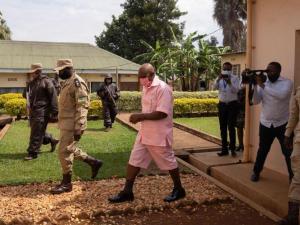 Rwandan prosecutors have filed a request to have the 'Hotel Rwanda' film hero Paul Rusesabagina jointly tried with 18 rebels.

The decision could dent his hopes of distancing himself from acts of the National Liberation Front (FLN), an armed group that claimed a spate of attacks against Rwanda in 2018.

Prosecutor-General Aimable Havugiyaremye said Monday that the trials should be conducted jointly as the charges are similar.

“We believe all the 19 defendants should be tried together. This is a common practice known as the principle of connectivity of offenses, which is provided for by our laws. This means that when a group of defendants is charged with the same crimes at the same time and the same place, it is in the interest of justice for the court to consider the cases together."

Rwanda announced that it has in custody 16 FLN fighters, including several commanders suspected to have conducted the attacks in southern Rwanda in 2018.

They include Colonel Felicien Nsanzubukire, whom the United Nations Security Council accused of trafficking weapons, and Major-General Anastace Munyaneza.

Others are Jean Chretien Ndagijimana, son of the late FLN commander Wilson Irategeka, who was killed by Congolese soldiers last December.

During his bail hearing last month, Mr Rusesabagina admitted to being part of the Rwandan Movement for Democratic Change (MRCD), an opposition group that formed the military wing FLN, but denied playing any role in the attacks.

He apologised for the atrocities committed and argued that "those responsible for the acts should be the ones held responsible."

He was denied bail last week on grounds he was a flight risk and will be remanded for 30 days ahead of the trial, whose date has yet to be announced.

Mr Rusesabagiba had not been in Rwanda for about two decades, mainly residing in Belgium as its citizen and the US as a resident.

Mr Havugiyaremye told the court that Belgium prosecutors cooperated in gathering evidence against him, including searching his residential home.

"I thank my counterparts in Belgium for responding to our request for international judicial cooperation to conduct a search of Rusesabagina's residence. The evidence collected during this search will be presented in court," he said.