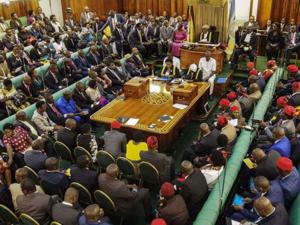 A plan to introduce a Bill that seeks to downsize the Ugandan Parliament by almost half is causing a stir within the ruling party as several legislators say the proposed law should be discussed and supported to improve governance.

Initially, the plan proposed to have each district represented by two people – a man and a woman – a move that would see the number of MPs fall from the current 556 – who include ex-officio members – to 292 MPs representing 146 districts.

Naome Kabasharira last week repeated her resolve to table a private members Bill, admitting that it is an “unpopular amendment” but a “necessary one” that will apply the brakes on the ever-swelling House that is a huge cost to taxpayers.

Other politicians, including National Resistance Movement Secretary-General Richard Todwong, agreed the issue of representation should be revisited, while lawmakers say there should be an amendment to either align with the number of voters per constituency or a straight adoption of the proposed plan of two MPs per district.

Last month, the constitutional court ruled that the electoral commission violated the constitution by creating new constituencies that do not meet the population quota, based on data from the 2002 and 2014 census. The court observed that densely populated districts such as Kampala, Wakiso and Arua were underrepresented when compared to smaller districts that have several legislators.

“Legislators represent people not areas and weighing votes differently according to where citizens happen to reside is discriminatory”, said Justice Catherine Bamugemereire.
She added that seats in Parliament must be apportioned based on population and the legislative districts must as nearly as practical be of equal population, and failure to do so renders the creation of such seats invalid.

Critics from the opposition strongholds of Kampala and Wakiso have long argued that the electoral commission is reluctant to demarcate new constituencies in these districts for fear that it hands more seats to the opposition and tilts the scales against the ruling party.

Sources reveal that the ruling party “is open to more ideas” but remains cautious about granting the proposed bill leeway, which may weaken its strength in Parliament.

Ms Kabasharira’s proposal is to amend Article 78 (1) of the Constitution, which among other things states that Parliament shall consist of members directly elected to represent constituencies and there shall be one-woman representative for every district.

The Article also adds that the MPs shall include the vice-president and ministers who, if not already elected a members of Parliament, shall be ex-officio members without the right to vote on any issue requiring a vote in Parliament.

The current eleventh Parliament has 529 elected MPs and 27 ex-officio members – the largest Parliament in East Africa by far – having grown from 445 lawmakers in the 10th parliament.

Ms Kabasharira argues that a huge Parliament is a burden to the taxpayer yet it does not translate into better participation in the legislation process or effective representation, and that two representatives per district are enough.

Indeed, as legislator numbers swell, audits by the African Leadership Institute (AFLI), a governance monitoring organisation, show there is no evidence of increased effectiveness in a big parliament.

The study shows that while Parliament performed relatively well in its legislative role by passing 27 laws during the third session from July 2018 – to June 30 2019, only half of the lawmakers participated in house debates and committee work.

“Only 50.6 per cent participated in the debating and passing of the 27 legislation, motions and resolutions of parliament during that year,” said Dr Gerald Wanzala Werikke, the head of civic engagement and research at AFLI.

“That means the other half of parliament is not active in the legislation function. In our view, increasing numbers means that participation in legislation process will be even lower, and that means the voters are not being effectively represented in this aspect of parliamentary work,” Dr Werikhe added.

The report also assessed the law makers’ performance in committee work, where they scored one of the lowest percentile ratings after dispatching only 12 per cent of Bills referred to committees within the required period.

According to Parliament’s business rules, a Bill referred to a committee should take 45 days, except for bills on borrowing, supplementary budgets and tax bills that are dispatched in record time. However, most Bills in the 10th Uganda Parliament were found to have stayed up to three months at the committee stage.

With a population of 42.8 million, Uganda’s legislature dwarfs the two-chamber Parliament of Kenya, the region’s biggest economy, which has 416 members (394 seats in the National Assembly and 67 in the Senate. Tanzania has a 393-seat Parliament.

Both Kenya and Tanzania have bigger populations than Uganda.

South Sudan’s parliament currently has 170 seats in the Transitional National Legislative Assembly and 50 in the Council of States.