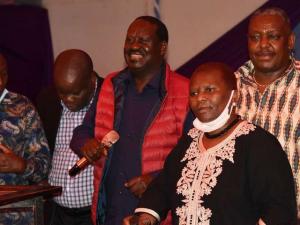 Orange Democratic Movement (ODM) party leader Raila Odinga on Sunday gave the strongest hint yet that the Building Bridges Initiative (BBI) report could be unveiled soon, setting the stage for a referendum.

“The BBI report is ready. In a matter of days, Uhuru and I will receive it. We will publicise it for everybody to read. So I get surprised when I hear some people oppose it. How do you oppose what you have not seen?” Mr Odinga posed.

He was speaking at the United Christian Ministries in Kawangware, Nairobi, where he was hosted by Dagoretti North MP Simba Arati.

While the contents of the much-hyped report remain a subject of much speculation, BBI — an offshoot of Mr Kenyatta’s and Mr Odinga’s March 9, 2018 Handshake — is expected to change the executive structure.

Kenya must have a conversation on how to increase the national cake, Mr Odinga said.

“The baby has to be born. And that baby is a new constitutional dispensation,” said Mr Kajwang’.

Mr Kamanda endorsed Mr Odinga for the presidency in 2022, saying the country was ready for his leadership.

“We are not going back. BBI is the solution Kenya has been waiting for. Time for the BBI is now,” said Mr Kamanda.

Before Mr Odinga spoke about the BBI report yesterday, questions had already emerged about why it was taking long for the two principals to receive it.

Jubilee Deputy Secretary-General Caleb Kositany said the proponents of BBI “are afraid of making it public.”

“We have no clue on the whereabouts of BBI. Of course Raila seems to be talking a lot about it, it’s only him who seems to know,” Mr Kositany, the de-facto spokesman of the Ruto camp, said.

Political analyst Dismas Mokua said President Kenyatta and Mr Odinga were holding on to the report because presenting its content during Covid-19 would paint the duo as insensitive to the plight of citizens.

Initially, it was believed that Mr Odinga’s absence during a medical surgery in Dubai to where he flew on June 21 barely a week to the date the report was completed, was the cause of the delay to have the report released.

However, since Mr Odinga’s return on July 12, no date to receive the report has been set by the two leaders.

President Kenyatta during his 11th address on the Covid-19 pandemic on August 26 told the country that, 10 years after the promulgation of the 2010 constitution, time had come for its improvement.

The joint secretaries of the BBI steering committee, Ambassador Martin Kimani and Paul Mwangi, said the report was ready.

“We shall be advised by the principals on the next step,” Mr Kimani said.  Mr Mwangi said: “Our remaining duty is to deliver the report.”

State House spokesperson Kanze Dena-Mararo was non-committal on when the President is likely to receive the report, only saying that, when the decision is made, “communication will be sent through our official portals.”