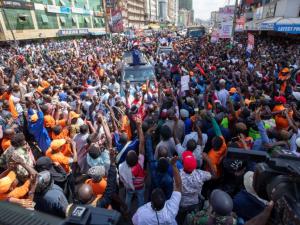 presidential nominee Raila Odinga has announced a plan to boost the informal sector that supports more that 16.4 million workers and their families, should he form the next government.

While giving a snapshot of his manifesto yesterday, Mr Odinga urged the government to adopt the Recognition of Prior Learning (RPL) policy to ensure those working in the informal sector get formal recognition.

He said the sector requires policy support to ensure the workers gain from their skills without the limitations brought about by requirement of academic papers.

“We must do something for this sector that forms the backbone of our economy consisting of millions of Kenyans whose skills are not recognised by our formal system,” he said. The ODM leader described RPL as a system that offers hope to the disadvantaged, and supports “what one can do” as opposed to the academic papers one may possess.

“RPL policy framework provides for recognition of knowledge, skills and competencies regardless of where and how they were acquired. It is a progression map to facilitate skilled workers’ transition from informality to formality,” said Mr Odinga, adding that its adoption was “long overdue.”

Although RPL was rolled out in 2020, implementation is yet to be realised. Partnership between the Ministry of Education and agencies such as the Technical and Vocational Education and Training Authority is yet to see full rollout of the programme, with some stakeholders still on the drawing board.

His push for the policy comes from what he said has been an ongoing conversation with jua kali artisans across the country, who are underpaid because they don’t have formal papers to support their manual skills.

“Our plumbers, wood and metal fitters have photo albums to show their work done instead of recognised certificates, thus losing the opportunities to the middlemen who have papers but no skills,” said Mr Odinga.

This will see the end of brokers, who subcontract skilled workers.

Giving examples of how skilled painters fail to get contracts and end up waiting in Nairobi CBD to be engaged at low wages, the former prime minister said this should not be the case.

“This is going to change where appropriate market value payments will now go directly to the skilled jua kali painters,” he said.

“Those already occupying the informal sector will be my first priority. Those with skills but have since retired will be called upon to continue offering the skills in the service of their country,” he said.

The ODM leader said the policy will open doors for many other individuals including refugees, migrants and other marginalised groups.

The push for RPL is also consistent with Azimio’s 10-point people programme of Kazi kwa Wote (work for all).