Refugees in Uganda, Kenya to get $35 million 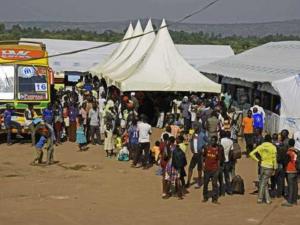 Refugees and their host communities in Kenya and Uganda will have access to $35 million for livelihood support over the next five years. The funding will aid in securing job opportunities for 20,000 people in Nairobi and Kampala.

“We’re working with our partners and the IKEA Foundation on a five-year, €30 million ($35 million) initiative to develop livelihood opportunities for these vulnerable communities,” said the International Rescue Committee (IRC) in a report.

“We want refugees to have meaningful, sustainable livelihoods,” said Priscilla Dembetembe, the project director for Re:Build at the IRC, adding, “For us to bring a sense of community, cohesion and togetherness, we should, as much as possible, also provide support to host residents in these areas where we are going to be supporting refugees.”

East African countries host one of the largest displaced populations in the world; with a total refugee population of 4.5 million and 8.8 million internally displaced people (IDPs) as of June. Many of the refugees, according to the IRC, have trouble finding safe and sustainable work.

While refugees are often forced to seek opportunities in rapidly growing cities as they try to rebuild their lives, they just like many local residents suffer from high levels of unemployment and minimal access to banks and loans, city services and social safety nets, according to IRC in a press briefing on July 27.

IRC is working with private companies to recruit refugees to give them the necessary skills and qualifications they need to eventually become full-time employees, while working to have their certificates accredited by local authorities so they are better equipped to secure employment in their new city.