Refugees in Uganda transform their lives beyond livestock 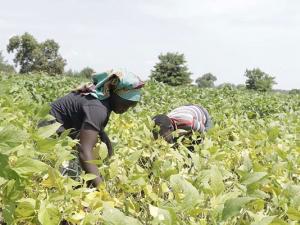 For the time she was in South Sudan, all that the 41-year-old Martha Alakiir from the pastoralist Dinka community knew was cattle rearing.

She knew where to take them for pasture, when to get them water, when to separate cows from calves, when to milk them and how to treat them.

In short, her life revolved around cattle. But one night in 2016, armed men attacked her village in Kajukeji, stealing animals, burning houses and indiscriminately shooting at people.

In the event, they shattered her life. In the ensuing chaos, she and seven of her children escaped to safety in Uganda.

Three years later, she and her children now stay in Uganda’s Kiryandongo refugee settlement about 220 km north of Kampala, a camp that accommodates more than 100,000 refugees from South Sudan, DR Congo, and Rwanda.

Refugees are given a small piece of land to build temporary houses and cultivate small gardens nearby. The land is donated by local communities.

With the land to cultivate, the food grown, mostly vegetables, supplements the refugees’ monthly food rations from the World Food Programme.

Even with the land, pastoralist Alakiir and family found it hard since growing of crops wasn’t in their skills set.

“Life was hard. The food from World Food Programme could not sustain all of us all. We opted to eat just one meal a day,” she said.

Here they were in a refugee settlement far from home trying to adapt to a life so difficult to take in. But she had no choice: She took to the small piece of land and grew some crops.

Local NGO, Save the Children, was combing the camp in search for people who could enrol for their European Union-funded agriculture.

Ms Alakiir enrolled in hope that she would pick a few skills to satisfy her newly found farming desire alongside other women in the camp.

Those who enrolled were trained in smart agriculture and were at the end of it, grouped into smaller units of 25 members. Each group was later supported with a few farm incentives and start-ups to kick off their farming career.

Lucy ALemo, one of the trainers said that they would receive rebuke from some refugees about how digging was hard and that they were comfortable with what WFP gave them monthly.

“Some joined hoping to receive money and others after getting the start-ups left the groups. Those who remained have big gardens and are selling their products,” Alemo said.

Ms Yare is the group’s secretary and keeps records books because she is the most literate of them all.

“We started with the seven goats we were given at start-up. We have raised that number to 18,” Ms Yare said, opening a small exercise book where she keeps her records.

She adds; “We were also given seedlings to plant on our small lands at home. At harvest time, we pooled our produce and sold it at once.”

Part of the money of the first harvest was shared for the next planting season and part of it was saved.

The members then started a savings group of Ush10,000 ($2.60)each week. The savings have since grown after several subsequent harvests to a point that now, each member has a side business apart from farming. They borrow from their savings, start up small businesses and repay the group.

Ms Alakiir for example makes waist beads, armlets and anklets which she sells to people in the camp and others as far as the capital, Kampala.

She and her daughter talk of fellow group members who have managed to send their children to boarding schools either in Kampala or neighbouring Lira district with school fees generated from the crops sales and their side businesses.

They boast about no longer having to buy food or complain about the little rations received from WFP since they can now get food directly from the gardens.

The group grows mostly vegetables, sweet potatoes, maize, okra, cassava alongside a goat rearing project. The products from these are then sold in markets within the camp, Kampala and for especially okra, put on buses to South Sudan where the market is larger.

Hope farmers group is just one of the over 20 groups in Kiryandongo. Under the EUTF, a consortium of local NGOs is implementing similar projects in other settlements like Rhino and Imvepi camps in Arua, Bidi bidi and Nyumanji.

Jonathan Matata, the assistant camp commandant of Rhino Camp said that The agreements range from paying the land owner annual fess to use their land of giving them a percentage of each harvest normally 20 per cent.

There have however been cases where the land owners make U-turns and demand the refugees to vacate their land a few months after they have planted their crop.

The United Nation’s High Commissioner for refugees has however started ensuring that the two parties have signed agreements before planting.

Hope farmers group for example given its growing financial muscle has acquired about two acres of land from a member of the host community in Kiryandongo on which the group members plan to go large scale with the very crops they have been growing on their small pieces of land.

“We plan to grow vegetables on one side and maize on the other. We are many and can do it with this bigger parcel of land that we have got,” Ms Yar added.

With this and the continuation of the home gardens cultivation, Yare who dropped out of school in her Senior Three year hopes to resume school soon after their expected yields.

With the two warring factions of the South Sudan war recently signing a peace deal, Alakiir’s family hopes to go back home someday but with something new in their ranks.

I asked Alakiir whether when she returns home, she would resume her pastoral way of live and abandon crop growing.

“How do I stop it (crop growing) and yet it is now my life? It is supporting me and when I get back home, I will continue doing it,” she said.