Regional course on protection of civilians opens in Rwanda 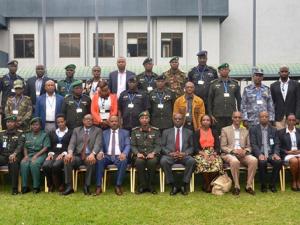 The course is being conducted under the auspices of the United Nations with support from Japan and aims at preparing officers who will serve in UN or African peacekeeping missions.

Speaking at the opening ceremony, Maj. Gen (Rtd) Tai Gituai, the lead facilitator for the course, said this was critical given that protection of civilian comes at the helm of every peacekeeping mission.

“Nowadays, the issue of protection of civilians is the main issue in any mission because as you know, a mission that does not endeavor to protect civilians is not a mission,” said Gituai, who has also previously served as deputy force commander of AMISOM, the AU Mission in Somalia.

“It is very important for military, civilians and police who are working in UN peace keeping missions to have a clear understanding of their mandate, having rules and requirements for establishing what we call the protection of civilian arrangements,” added Gituai.

He explained that during the course period, participants will tackle different issues including the human rights law, humanitarian international law and will get to understand how the UN system operates among others.

The academy director Col. Jill Rutaremara reiterated the course relevance stressing that violence against civilians still persists in different forms in various UN and AU missions where troops are deployed for peacekeeping missions.

“It requires proper interpretation of mandates within the scope of the UN/AU policies, guidelines and principles. In addition, it requires treating each mandate in its own context,” He noted

Adding, “Coordination, collaboration and information sharing among the relevant stakeholders is also necessary for effective implementation of protection of civilian mandates,”

He reminded the course participants that it is their duty to monitor and report any violation of human rights as well as violations of rights of the parties to the conflict while on peacekeeping missions.

“Every peacekeeper should know that he/she shall individually be held accountable for committing unlawful acts,” he advised.

The trainees welcomed the course, saying it was timely given challenges that participants in peacekeeping missions normally meet in their day-to-day endeavors.

“I have been to peacekeeping missions twice and together with my colleagues, we have always met some challenges in protecting civilians. Such courses therefore are critical,” said Major Faustin Nkurunziza from Rwanda Defence Force.

“However, with this training we hope to go in deep of the principles which will help us to serve more professionally in the next deployments while protecting women and children among other victims of conflicts,” he said.