This Rubavu Boy has Bomb Fragments Shelled from DR Congo Lodged in his Head for seven years , Leaders Say Support Is Over 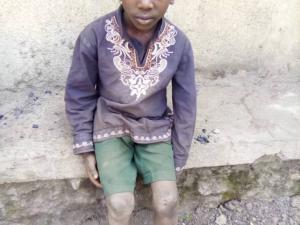 An eight-year-old boy in Rubavu district bordering DR Congo has miraculously spent the better part of his very short life with bomb fragments from a conflict he had no idea about.

The little boy Jonathan Tuganijuru lives in Ubwiyunge village, Mbugangali cell, Gisenyi sector, Rubavu district, with his sick father Twagiramungu Louis. Some of the bomb fragments sustained exactly seven years ago this past Saturday, have not been removed despite a Rubavu district commitment to support the family.

On a Thursday, August 29, 2013, the Twagiramungu family found themselves at the centre a bitter diplomatic and security battle involving armies from more than ten countries. A bomb fell in Rubavu town, instantly killing Twagiramungu’s wife as she walked to the market. She had a two-and-half month old baby on her back.

At the time, a fierce military operation was ongoing in Goma and adjacent regions against M23 rebels, conducted by a joint force of the DR Congo army, supported by the so called ‘Force Intervention Brigade’ of the UN mission MONUSCO. The heavily armed force comprised armies from Tanzania and several Southern African countries.

The UN and DR Congo had for years accused Rwanda of being behind the M23 rebels, accusations that Kigali vehemently denied. In the above operation, the rebels had been squeezed to a small region near Rwanda’s border.

In that week alone up to August 29, some 34 bombs and rockets had been fired into Rwanda, according to figures issued by Rwanda’s foreign affairs minister at the time, Louise Mushikiwabo, speaking then.

Mushikiwabo, in press encounter on that August 29, angrily accused the Congolese army of “persistent shelling” into Rwanda. “Rwandan civilians are being targeted by DRC forces. We have remained restrained for as long as we can but this provocation can no longer be tolerated,” she said, adding the latest shelling had killed a woman with her baby.

“We have the capacity to determine who fired at us and will not hesitate to defend our territory.” However, the Congolese army or FARDC spokesman Col Olivier Hamuli told various international media on same day that their forces would never fire at civilian populations.

“That could only be rebels,” he said, adding that M23 fighters, and not FARDC soldiers, were in the area from which the shells that landed in Rwanda, were fired.

Child had many bomb fragments

While the war of words went on, local medics had taken the body of the killed woman with her baby to Gisenyi Hospital. The Chronicles exclusively reports that the baby survived, and we have traced that baby boy, now the 8-year-old Jonathan Tuganijuru.

In an emotional narration, the distraught dad Twagiramungu, tells us that on the same day of the attack, he and the baby were transferred from Gisenyi Hospital to the University Teaching Hospital Kigali or CHUK, a national referral facility.

“Doctors at the hospital in Rubavu said they didn’t have the capacity to handle the case as the baby had bomb fragments lodged in his head and other injuries,” said Twaguramungu.

At CHUK, The Chronicles has established that the baby’s case was received by Dr Tshizubu Patrick. Medical team at CHUK determined that the baby was too young to undergo surgical operations to remove the bomb fragments.

‘Four days later, Twagiramungu and the baby were discharged from hospital after getting different treatments to help minimize the impact the bomb fragments on the child’s body. The baby was brought back to the hospital after reaching age of six months.

Dr Tshizubu who handled the baby’s file, refused to discuss the case, saying media issues are handled by the head of his department. The boss, Dr Fidens Dusabeyezu, head of the Radiology department at CHUK, said he doesn’t have neurological skills and therefore cannot comment on the baby’s case.

Dr Dusabeyezu referred The Chronicles to another colleague Dr Muneza Severien. For his part, Dr Muneza said he had not dealt with the case and was not in position to comment.

What our reporter was looking for, was to establish the medical interventions conducted on baby Jonathan. The father narrated to us that he was told one bomb fragment was removed at the first surgery. During the following operation, two more fragments were removed. In 2018, three more fragments were successfully retrieved.

For some time, as far as the treatment costs were concerned, Rubavu district was in charge. “The doctors at CHUK directed me that every year, I have to take Jonathan back for continuous checks to determine how to deal with the remaining fragment,” said Twagiramungu, the father.

However, since the last hospital rendezvous on February 25 2019, young Jonathan has spent nearly two years without going back to hospital for the required checks and impending surgery.

The father Twagiramungu is so desperately poor; he struggles to find food, and therefore cannot even get transport to Kigali.Today, the 79-year-old Twagiramungu, frail and looking sickly himself, lives in a one-roomed house with his two children, Jonathan and elder brother Maniragaba Fulgence.

Back in 2013, days after the shellings, Rubavu district also covered all expenses for the funeral of Jonathan’s mother. For medical bills, and transport to hospital, as well as upkeep support, the district partnered with the NGO Hope and Homes for Children.

Separately, this NGO was working with central government to implement the closure of all orphanages in Rwanda. The district donated a plot of land in Gikombe Cell to the children, according to district records from the time.

We also found out that Twagiramungu’s widow already had four children from a previous marriage. And by the time of the shelling incident, the deceased had had two children with Twagiramungu; who are Jonathan and elder brother.

The NGO agreed to construct a house for the children, all the while sidelining their father. Quarrels ensued for months as the district preferred to register the land in the names of the children, while Twagiramungu couldn’t understand why the district officials were intent on doing that. As a result, the promised house was not built, according to a sector official who followed the issue firsthand.

Eventually, the NGO ended its operations in Rubavu district and transfered Jonathan’s case to the district headquarters, according to Moise Munyamariza, who worked for Hope and Homes for Children as Project Officer in Rubavu.

The district decided to have the four children of the deceased woman separated and taken to live with their father. Twagiramungu remain with his two children.

When The Chronicles visited the poverty-stricken home, we found a shy and soft-spoken Jonathan, always putting on a dry smile. He doesn’t look what a typical 8-year-old should. Jonathan is a sad child.

“At night, I feel pain in my hand and leg. On some nights, my leg becomes numb and I can’t feel it. I cannot carry a small water jerrycan unless when its empty,” he narrated.

Jonathan limps as he walks around, often taking breaks because he can’t stand for long. While other kids play, he watches from a far.

Twagiramungu is a bitter a man, blaming his child’s state on a one Leonard Bigaya. He is currently an official at the Rubavu district headquarters, and has been the one directly dealing with this family’s case since 2013.

“Whenever I go to Bigaya to support me to reach CHUK hospital, he just ignored me. I borrowed money from different places and it is no longer possible. I have been to the sector, the district and different officials,” said Twagiramungu.

He added: “Bigaya supported me only on two occasions. For all this time, when I go to his office, he dodges me. The last time I met him, he told me ‘the money is over’…” (“amafaranga yarashize“).

Twagiramungu doesn’t shy from alleging that the district received money from the NGO for Jonathan’s treatment and long-term support to the whole family to uplift them from poverty. The elderly father also alleges that when President Paul Kagame visited Rubavu district, officials prevented him reaching the microphone to report his problem during the interactive session.

Pacifique Ishimwe, the Rubavu district vice-mayor in charge of social affairs, among whose responsibilities includes issues like Jonathan’s health, declined to be interviewed. She referred us to Bigaya.

For his part, as the district point person who knows all information about this case, Bigaya said; “We are aware of that case. The problem is the father didn’t bring the hospital appointment letters so that the child can be taken to remove the remaining bomb fragments.”