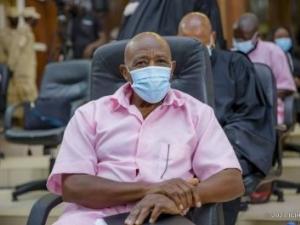 The High Court Chamber for International Crimes has today delivered its verdict on 21 defendants who, as members of the National Liberation Front (FLN), have been accused of terrorism charges, with three convictions being handed down so far. Among them is Paul Rusesabagina who was the President of MRCD-FLN terror group. He has been handed 25-year jail term.

Rusesabagina was arrested in August last year. He has been undergoing trial along with 20 co-accused terror suspects including Callixte Nsabimana alias Sankara, the former spokesperson for the terror group.

The crimes were committed since 2018 when the aforementioned terror group plotted attacks to Rwanda which claimed lives of nine innocent residents in the Southern Province.

They left many others gravely injured, and caused significant material and economic damage in South-West Rwanda.

During trial proceedings, the Prosecution sought life sentence for Rusesabagina and 25 years for Callixte Sankara.

Among those sentenced was the FLN’s commander and spokesperson, Callixte Nsabimana, who was arrested in 2019. Prior to this, he had claimed responsibility for the 2018 attacks, and had announced plans for further attacks. He has been sentenced to twenty years in prison, having pleaded guilty to most charges.

Another FLN spokesperson, Herman Nsengimana, was sentenced to five years in prison. A member of the CNRD (Conseil national pour la renaissance et la démocratie), Nsengimana was arrested in 2019 in Congo’s South Kivu province along with over 400 other CNRD insurgents.The CNRD is a splinter faction of the Congo-based FDLR (Democratic Forces for the Liberation of Rwanda). It was led by FLN co-founder Colonel Wilson Iratekega until his death in January 2020.

Also convicted was the FLN’s founder, Paul Rusesabagina, who was sentenced to twenty-five years. Prior to the trial, Rusesabagina publicly admitted to founding the group as the armed wing of his political party, the Rwandan Movement for Democratic Change (MRCD). He had repeatedly expressed support for the group’s activities including after the 2018 attacks.

Rwanda Government Spokesperson, Yolande Makolo has said that the ’lengthy trial has exposed the terrorist activities of the FLN group led by Rusesabagina’ noting that the ruling has delivered justice.

"The evidence against the accused was indisputable, and the people of Rwanda will feel safer now justice has been delivered. The trial has been a long and painful ordeal for the victims of FLN attacks, particularly for those who were called upon to testify. Our thoughts today are with these brave witnesses, and the family and friends of the victims,” she said.

What to know about the case involving terror suspects

2) In December 2018, Callixte Nsabimana, also known as “Sankara”, took to international radio and social media to announce that the FLN had claimed responsibility for these attacks. He was arrested in April 2019, and immediately pled guilty to 16 charges of terrorism.

3) The FLN is the military arm of the PDR-Ihumure party founded by Paul Rusesabagina, and the Rwandan Movement for Democratic Change (MRCD) political coalition which he led.

4) Also in December 2018, Rusesabagina issued a statement on the MRCD-Ubumwe YouTube channel (later removed but can be found here) as the “President of MRCD-FLN”. In the statement he announced that the FLN had “launched a military struggle to liberate the Rwandan people”, and that “the time has come for us to use any means possible to bring about change in Rwanda”. He pledged his “unreserved support that our youth, the National Liberation Forces, launches against the Kagame army, in order to free the Rwandan people”.

5) On 21 October 2019 Belgian Police searched Rusesabagina house in Brussels and on 13 May 2020 Belgian Prosecution Authority sent to NPPA evidence obtained from the inspection of computers and telephones seized during the search.

6) On 31 August 31, 2020, the Rwanda Investigation Bureau announced that Mr. Rusesabagina was in its custody. He had been the subject of an arrest warrant and was subsequently charged with multiple offences, including terrorism for founding the National Liberation Front (FLN).

7) On 3 December 2020, the High Court Chamber for International Crimes agreed to the request to merge the trial of Mr. Rusesabagina and his co-accused.

8) The trial was initially scheduled to begin on 26 January 2021 was postponed due to COVID concerns. Proceedings eventually commenced on 17 February 2021. A live stream of the trial, including one with English translation, was available online throughout.

9) The court was also shown various documents, including e-mail message records, revealing that Rusesabagina was in direct contact with Antoine Hakizimana (aka Gen Jeva), commander of the FLN’s operations in the northern region of the DRC. In the exchange, Hakizimana updated Rusesabagina on the group’s current military operations and asked him for additional financial assistance. Rusesabagina thanked him for the report and promised to provide funding.

10) Further evidence was provided by Dr. Michelle Martin, an American human rights activist and professor, and former volunteer at the Chicago-based Hotel Rwanda Rusesabagina Foundation. In her testimony, during which she displayed and read items from Rusesabagina’s personal e-mail correspondence, she expressed her belief that the foundation “operated as a political organisation whose apparent primary goal was overthrowing the Rwandan Government”.