Rusesabagina trial: Appeal hearing pushed on request of the accused 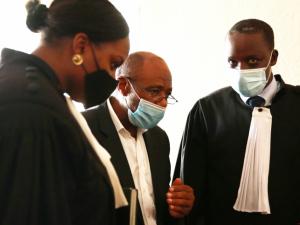 The Nyarugenge Intermediate Court has for the second time postponed the appeal hearing of Paul Rusesabagina, upon the suspect’s request because his lawyer was not present.

Last week, Rusesabagina had requested that his hearing be adjourned to Tuesday, November 10, citing that none of his lawyers was available at the time.

Before last week’s hearing, Rusesabagina had two lawyers who were later recalled by the Rwanda Bar Association—an umbrella that brings together all practising lawyers in the country—on the basis that the suspect no longer was no longer eligible for legal aid.

Rusesabagina has already hired Gatera Gashabana as part of his legal team but appearing in court virtually on Tuesday, the judge said that the lawyer had requested that the case be pushed because he was still stuck in Tanzania.

The suspect who faces a litany of terror-related charges seeks to challenge a decision by the Kicukiro Primary Court last month to remand him for additional 30 days as had been requested by the prosecution.

While attending the hearing online on Tuesday, Rusebagina argued that his lawyer Gatera Gashabana is not yet in the country, therefore requesting the adjournment of his hearing to a later date when the lawyer will be present.

According to the judge, Gashabana recently sent a submission to the court explaining that the earliest he can attend the hearing is November 20.

The lawyer attributed the delay to several Covid-19 preventive measures in place such as Covid-19 tests required before and after boarding flights.

Prosecution said that though the request delays the hearing, it should be granted owing to the general principle that a suspect is entitled to legal representation.

However, the prosecution emphasized that the suspect and his lawyer should be cautioned by the court not to further delay the proceeding.

Rusesabagina is currently detained in Nyarugenge Prison, and he attends court sessions online due to measures in place to prevent the spread of the Covid-19 pandemic.

The crimes he is accused of were mostly committed by FLN, an armed group that was founded by MRCD, a group that has Rusesabagina as founding president.

He has previously told the court that he sent funds and helped fundraise for FLN.

According to the prosecution, the additional 30 days will be used to interview survivors of FLN attacks who are located in Nyaruguru, Nyamagabe and Rusizi, and among others gather additional evidence against the suspect.

At least nine people were killed during the attacks.