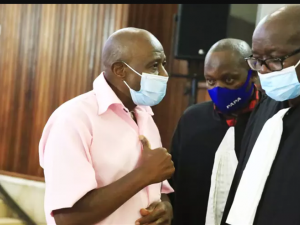 The High Court Chamber for International and Cross-Border Crimes will today read its verdict of a case involving Paul Rusesabagina and other 20 suspects linked to MRCD and its military wing, FLN.

The trial in which all the suspects face terrorism-related charges has been ongoing for the past seven months.

Particularly, Rusesabagina who is the political figurehead is being charged with nine terrorism-related charges. Prosecution is seeking a life sentence for him.

The 67-year-old is reportedly likely expected to be absent in the verdict hearing, as he continues to boycott the trial.

What are the charges?

The first major attack was carried out in Nyabimata, Nyaruguru District. Here, two people were killed on the spot, while a third victim succumbed to gunshot wounds later.

The second one targeted public transport along the Kigali-Rusizi highway, where the FLN assailants ambushed at least three buses, killing at least six passengers in the Nyungwe forest.

In previous hearings, Rusesabagina denied involvement in the rebel attacks, although he founded the opposition group, the Rwandan Movement for Democratic Change (MRCD), that prides the FLN as its armed wing-based in eastern DR Congo.

More recently, however, new court-based evidence revealed that he had used WhatsApp to coordinate arm deals for terror attacks.
Rusesabagina is charged alongside 20 other members of the FLN rebel group.

Besides Rusesabagina, the group is composed of Callixte Nsabimana, also known as Sankara, and Herman Nsengimana, both of whom are successive spokespersons of FLN militia group.

Angelina Mukandutiye is also among the accused, being the sole woman in the group.

She faces the charge of being a member of a terrorist group returned to Rwanda after an offensive by the national army of DR Congo routed FLN and other fighters out of their positions in the eastern part of the country.