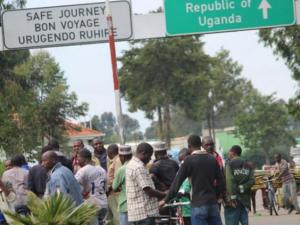 A coalition of East African citizen groups announced Tuesday they were suing Uganda and Rwanda in a regional court for financial losses resulting from a border dispute between the feuding nations.

Trade has been severely disrupted since late February when Rwanda abruptly closed the border with its northern neighbor, severing a major economic land route used daily by merchants and businesspeople on both sides.

The closure followed months of rising acrimony between Rwanda's Paul Kagame and Uganda's Yoweri Museveni, former allies turned foes who have exchanged public accusations of spying in each other's territory.

Apart from a brief interlude in June the frontier has remained shut, damaging the local economies of both countries reliant on cross-border trade to survive.

Three civil society groups, on behalf of communities along the border, said they had filed a complaint with the East African Court of Justice demanding reparations from Uganda and Rwanda for their losses.

The court, in the northern Tanzanian town of Arusha, was set up to rule on matters of the East African Community (EAC) -- a six-member bloc including Rwanda and Uganda as well as Tanzania, Burundi, Kenya and South Sudan.

Sheila Kawamara-Mishambi, executive director of the East African Sub-regional Support Initiative for the Advancement of Women, one of the complainants, told AFP the attorney generals of both countries had been served with court papers "over the continued arbitrary border closure".

In a statement, the coalition said the blockade contravened the treaty terms of the EAC concerning freedom of trade and movement over the border.

"The court should declare that this impunity must not be allowed to happen anywhere else within the EAC," the statement read.

The closure has "far reaching effects on the lives and livelihoods of the business community, and has caused social and emotional distress among the local people, anguish and dislocation of families, deaths among others", it continued.

The coalition said it had received statements from 400 citizens affected by the blockade, and demanded that they be "adequately compensated" for their losses.