Rwanda, AU and UNHCR sign agreement to evacuate refugees, asylum-seekers out of Libya 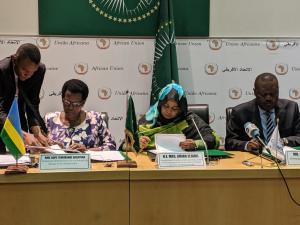 The Government of Rwanda Tuesday signed a Memorandum of Understanding with the African Union (AU) Commission, and the United Nations High Commissioner for Refugees regarding the evacuation of refugees and asylum-seekers out of Libya.

The agreement was signed at the AU Headquarters in the Ethiopian capital of Addis Ababa.

Under the framework, the “Government of Rwanda will receive and provide protection to refugees and asylum-seekers, as well as others identified as particularly vulnerable and at-risk, who are currently being held in detention centres in Libya,” according to a joint statement released after the signing Tuesday morning.

They will be transferred to safety in Rwanda on a voluntary basis, it says.

As part of the tripartite agreement, the statement adds, “the first group of 500 persons in need of international protection will be evacuated.”

“The group is principally made up of people originating from the Horn of Africa and includes children and youth at risk.”

After their arrival, the parties agreed, the “UNHCR will continue to pursue solutions for the evacuees.”

While some may benefit from resettlement to third countries, others will be helped to return to countries where asylum had previously been granted, or to return to their home countries if it is safe to do so, according to the communique.

Some may be given permission to remain in Rwanda subject to agreement by the competent authorities, it adds.

The development follows a commitment by the Government in 2017 to host African refugees trapped in Libya, as European nations stepped up migrant controls.

On arrival, the refugees will be accommodated in Gashora Reception Centre in Bugesera District.

Evacuation flights are expected to begin “in the coming weeks, and will be carried out in cooperation with Rwandan and Libyan authorities”.

The African Union, it was agreed, “will provide assistance with evacuations, mobilise resources, and provide strategic political support with training and coordination.

Today’s signing follows a months’ long process after the Government’s commitment in November 2017.

President Paul Kagame made the commitment following damning revelations that tens of thousands of people from across Africa were not only stranded in Libya after their failed bid to reach Europe but many of them were being subjected to slavery.

Reports indicated that the refugees, most of them from West African countries, were openly being sold in modern-day slave markets in Libya.

The United Nations estimates that 4,700 “persons of concern are held in dire conditions inside detention centres in Libya”.

“They urgently need to be moved to safety and to be provided with protection, lifesaving assistance, and durable solutions,” the joint statement reads in part.

Thousands of migrants have died over the past few years while trying to cross the Mediterranean Sea to European countries in hope for better lives.

Human rights groups have documented multiple cases of rape, torture and other crimes at the detention facilities in Libya, some of which are run by militia groups.

Minister Kamayirese, Minister in Charge of Emergency Management in a press conference hel at Kigali Monday 9th, dismissed  critics who say that Rwanda, which still has a considerable percentage of people living in poverty, has the resources to sustain refugees from other parts of the continent.

“As a country, we have an experience of our people living in other countries as refugees for many years. We know what it means to be a refugee. You don’t need to have all the resources in the world to support the vulnerable and people whose lives are in danger,” She said

Rwanda is home to hundreds of thousands of refugees mainly from DR Congo and Burundi.