Rwanda condemns a fresh arrest of over 40 nationals , writes to Uganda government 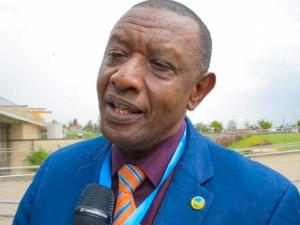 Rwanda’s High Commissioner in Uganda, Frank Mugambage has on Thursday, July 25 written to Uganda government condemning the arrest of more than 40 Rwandans in Kampala terming the erroneous act ‘ridiculous.’

On Wednesday, July, 24, Uganda police and state operatives arrested over 40 Rwandans in an operation mounted by the country’s military intelligence operatives.

The arrest took place at Chieftaincy of Military Intelligence (CMI) church in Kibuye, Entebbe Road. The church’s membership is reportedly only Rwandans.

Security cordoned off the place as the group held a meeting and ordered them out into a waiting van.

According to Commissioner Mugambage, the arrest was arbitrary adding that there have been many arbitrary arrests and this is a continuation of what has been happening.

“Arbitrary arrests of Rwandans in Uganda are now a common occurrence where thousands have been arrested over the past one year with no access to basic rights like consular services, legal counsel or familial visits”, he said.

Mr. Mugambage has therefore written to Uganda’s Ministry of Foreign Affairs inquiring about the arrested Rwandans and their identities.

“We want them to tell us what the whole thing is all about because it is ridiculous that a whole church can be arrested and it is said that they are spies,” he noted.

The envoy explained that ever since they got wind of the matter, his office had been also trying to follow up and at least obtain names of the people arrested in vain.

He added that many Rwandeses have on several occasions been arrested in Uganda but after spending months in different detention facilities, they are dumped at the Rwandan border, majority of them after undergoing torture at the hands of Ugandan security operatives.

Uganda and Rwanda have had frosty relations with Rwanda accusing Uganda of hosting elements opposed to the regime in Kigali, while Uganda accuses Rwanda of sending spies into the country.

The row between the two countries came to the climax when Rwanda closed its border and blocked its nationals from crossing to Uganda.