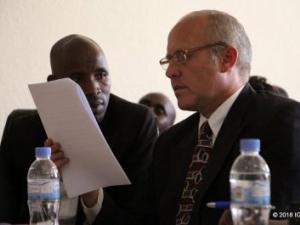 Rwandan authorities have deported an American missionary accused of causing public disorder and being in the country illegally.

Gregg Schoof, a Baptist preacher, was deported on Monday night shortly after being arrested and being interrogated alongside his son by Rwanda Investigative Bureau.

The Emmigration and Immigration office says  that Mr Schoof "did not have a valid purpose to stay in Rwanda" after his church was closed for contravening regulations and his Christian radio censored indefinitely for airing "hateful sermons".

"We offered him a short extended stay to prepare to leave the country on condition that he does not disturb public order, but he went ahead and violated that condition and we decided to deport him."

Mr Schoof was living in Rwanda since 2003 together with some members of his family, running Amazing Grace FM, which was closed last year after airing a sermon that was ajudged by the Rwanda Media Commission as "hateful against women".

That particular sermon by his fellow pastor, Nicolas Niyibikora, was aired live in Kinyarwanda in which he argued that women "are the source of all evil".

The sermon drew fire from women organizations in the country, leading to the radio station's suspension and later, indefinite closure.

Schoof took the media regulator to court on grounds that his radio was closed illegally but he lost the case.

Last Sunday, Schoof sent out a communication to journalists calling for a press conference on Monday to share his grievances, but was arrested outside the venue on Monday morning and interrogated by authorities together with his son.

On Monday morning, Schoof circulated a press release in which he claimed that the Rwandan government had "taken a stand against God with its heathen practices".

Among other things, he criticized the teaching of reproductive health in Rwandan schools and the easing of restrictions on abortion

Before his detention, he provided a statement to reporters in which he asked if "this government is trying to send people to hell" and accused the government of legalizing abortion and providing condoms in schools.

“I did not come here to fight the government. I came to preach the gospel. I do not care about politics nor do I care about whom the president is or what party is in power,” he said.

In February last year, authorities ordered 700 churches to close across Rwanda - including Schoof's church in Kigali - for failing to comply with building regulations and for noise pollution.