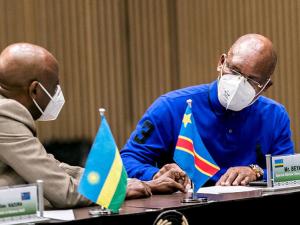 Top security officials from Rwanda and DR Congo on Sunday, February 14, concluded their meeting after agreeing on "a series" of recommendations and a plan of action that will help deal with security threats that affect both countries.

The meeting was held in Kigali.

Rwanda's delegation was led by the Chief of Defence Staff Gen Jean-Bosco Kazura and the Congolese delegation was headed by Francois Beya, President Félix Tshisekedi's special advisor on security affairs.

The recommendations from the meeting which were not immediately released to the media, will be forwarded to the two countries' leaders for consideration.

Beya said they are "a reference document that we shall take to our Heads of State."

Part of a joint communique released at the end of the meeting states: "This meeting is also a demonstration of the unwavering commitment of the two Heads of State to restore peace in eastern DRC and in the region."

"The meeting came up with a series of recommendations and a plan of action for their expeditious implementation."

At the start of the meeting, on Saturday, Kazura noted that the two countries' Heads of State, Presidents Paul Kagame and Tshisekedi, "mandated us" to meet regularly, discuss and find ways to do whatever is necessary "so that our countries work together and develop together."

The meeting is a follow up to another one held in Kinshasa last month.

The Kigali meeting was also in line with decisions of a virtual mini-summit convened by Tshisekedi in the Congolese border town of Goma on October 7, 2020.

During this summit, the two countries' leaders decided to strengthen peace and security for regional development.

The DR Congo is home to militia groups that originated from Rwanda. Intelligence officials from both countries regularly share information as the Congolese army continues to battle the militia groups.

Ever since coming to power DR Congo President Félix Tshisekedi

vowed to address a wide range of issues in his country, including war and insecurity.

In an effort to deliver peace, serenity, and calm to eastern DR Congo, the Congolese army has in the past two years moved in decisively and battled anti-Rwandan militia based there.

In the past two years, hundreds of militia fighters were captured and repatriated to Rwanda while others were killed in battle. Hundreds of their civilian dependents have also been returned home, rehabilitated and reintegrated into society.

On Saturday, Jean-Claude Kamb, a senior Congolese intelligence officer said "we are very optimistic regarding the military operations to neutralise all these negative forces."